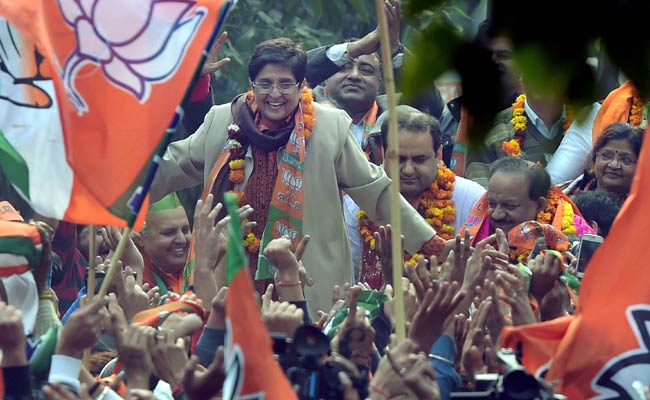 BJP's Chief Ministerial candidate for the Delhi Assembly elections at a road show before she filed her nomination. (Press Trust of India)

The 65-year-old Ms Bedi, who has been pitchforked to a leadership role within days of joining BJP, also felt that the RSS, a right-wing organisation, was a very disciplined outfit and has been contributing significantly to nation building.

"They (RSS) are very nationalistic. I would think here is an organisation which kept India together, which has kept India neat," Ms Bedi told PTI in an exclusive interview.

The former IPS officer, who was a core member of Team Anna till about two years back along with Aam Aadmi Party (AAP) chief Arvind Kejriwal before they parted ways, said the AAP leader's agitation at Rajpath within a month of becoming Chief Minister (on December 28, 2013) had "ticked" her off very much.

It was after Mr Kejriwal's protest at Rajpath that she thought of joining politics to save Delhi from "confrontational politics", she said.

"The city of Delhi was the reason for my joining politics. Delhi has gone through a huge upheaval ever since this man's (Kejriwal) entry (into politics). It stood still and it's been only on an agitation mode which left a very bad taste in the mouth of Indians," she said.

"Because whatever happens in Delhi, happens in India. It affects India, it impacts India. It's been all about confrontation, it's all about Rajpath dharnas. What kind of person is he (Kejriwal), who says I am an anarchist? Three days, Delhi was at a standstill (when Kejriwal was on dharna as Chief Minister)," she said.

While she was severely critical of the AAP, she was full of praise for the RSS and said people do not know the "real" RSS.

Promoted
Listen to the latest songs, only on JioSaavn.com
"You do not know them. I have seen it all... I saw very disciplined people and being very very strongly nationalistic, teaching discipline to youngsters," she said.