Pollution levels in the region entered the "severe-plus" category on Friday, with the Supreme Court-mandated pollution control body EPCA declaring a public health emergency in Delhi-NCR and banning construction activity till November 5. 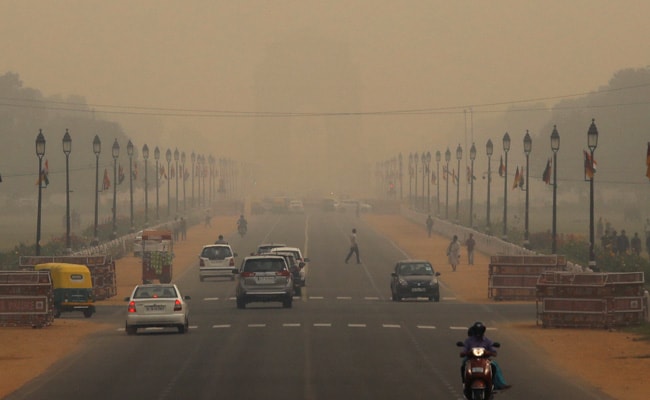 The Delhi government has announced that all schools will be shut till November 5.

As air pollution reached alarming levels in the national capital, hospitals reported a surge in the number of patients suffering from respiratory and breathing complications, with doctors advising residents, especially children and the elderly, to stay indoors as much as possible.

Pollution levels in the region entered the "severe-plus" category on Friday, with the Supreme Court-mandated pollution control body EPCA declaring a public health emergency in Delhi-NCR and banning construction activity till November 5.

With poor air quality prevailing in the national capital for the past three days, there has been a rise in the number of patients visiting out-patient departments (OPDs) or emergencies with respiratory or cardiac-related problems.

"Patients are coming with complaints of watery eyes, cough, breathing difficulty, allergy, exacerbation of asthma and chronic obstructive pulmonary diseases (COPD)," AIIMS Director Randeep Guleria said, adding that children and those above the age of 60 are the worst affected when the pollution levels are high.

Besides affecting lungs, high levels of pollutants in the atmosphere cause inflammation in blood vessels and may lead to hardening of arteries which can act as a trigger for stroke or heart attack in persons, already at risk of the disease, Guleria explained.

Vijay Gurjar, assistant professor in the Department of Geriatrics at AIIMS, said that there is around 20-25 per cent rise in footfall of elderly patients suffering from several health issues due to pollution, both at the casualty and OPDs.

Air pollution exacerbates lung conditions and aggravates the condition of those having pre-existing health issues such as asthma, pulmonary and cardiovascular diseases.

"Those who could be stabilised with medication are now requiring admissions for stabilisation," Gurjar said.

Other than the elderly, many young children are also turning up with complaints of cold, cough, sore throat and allergies, said Minakshi Bhardwaj, medical superintendent of RML Hospital.

"We are advising the parents to limit outdoor activities for the children, especially those already suffering from some kind of respiratory health issues, till the air outside improves. They do need to go out for playing but the weather is not just appropriate for any kind of outdoor activity.

"Besides, normal adults should also stay indoors as much as possible and the elderly should not go for morning walks as the pollution is at its peak at early morning hours," Bhardwaj said.

The Delhi government has announced that all schools will be shut till November 5 in the wake of the rising level of pollution.

Doctors at several private hospitals also reported around 25-30 per cent rise in footfall of patients at the OPDs and emergencies.

According to Dr Abhinav Guliani, chest physician at Sir Ganga Ram Hospital, there has been a sudden increase of almost 25-30 per cent patients in the casualty and OPD with breathing difficulty, cough, chest heaviness and infections after Diwali.

Most of the patients coming to the hospital belong to the age group 3-12 years and above 60 years. The number of patients with existing lung diseases requiring admission has also increased.

"Some of the patients coming to the casualty with these problems are severe enough requiring admission," Dr Abhinav Guliani said.

"The percentage of people who are complaining of respiratory ailments have majorly increased to about 20 per cent. Our routine patients on the other hand are cancelling their regular visits so as to avoid outdoor pollution," Dr Rajesh Chawla, senior consultant, Respiratory medicine at Indraprastha Apollo Hospital said.