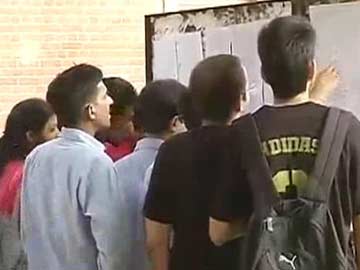 Acharya Narendra Dev, ARSD and Shyama Prasad Mukherjee College have posed a stiff competition with its 100 per cent cut-off for the computer science programme for non-science aspirants.

New Delhi: The first cut-off list of Delhi University for its undergraduate courses has for the third time touched the 100 per cent-mark with three rank outsider colleges this time putting the ceiling at maximum for admission to its B.Sc (Computer Science) course. (See full list)

After much delay due to the row over the controversial four-year undergraduate programme (FYUP), admissions to academic session 2014-15 will begin today much to the relief of over 2.7 lakh students who applied this year. (Delhi University Scraps Four-Year Undergrad Course, Admissions Soon: 10 Developments)

Acharya Narendra Dev, ARSD and Shyama Prasad Mukherjee College have posed a stiff competition with its 100 per cent cut-off for the computer science programme for non-science aspirants.

The 100 per cent cut-off for B.Tech (Computer Science) at Ram Lal Anand College last year and for B.Com (Hons) at prestigious Shri Ram College of Commerce (SRCC) in 2011 had sparked a major outcry.

Hindu College kept its cut-off for Commerce and Economics Honours courses in the bracket of 97.25-99.75 per cent and 97.5-99 per cent respectively. Cut-off for English was between 97-98.5 per cent.

SRCC, ranked among the best in the country for higher studies in Commerce and Economics, announced high cut-offs for B.A (Hons) Economics with Commerce students under General category required to have above 98.25 per cent to get admission in the elite institution. (Delhi's Sri Ram College of Commerce Releases First Cut-Off List)

Additional eligibility criteria by colleges, which had been done away with before FYUP was rolled back, has been brought back.

SRCC has imposed the rider that students should have studied mathematics in Class XII and have at least got 70 per cent in board exams.

For Commerce Honours, SRCC has set the cut off between 99.25 and 97.5 per cent, while Venkatashewara College has put a benchmark of 97.25 to 98 per cent. The Commerce Programme cut-offs for many colleges were above 90 per cent with Hansraj having a cut-off range at 97.25-99.75, Lady Shri Ram College at 97.5 Shaheed Bhagat Singh at 94 and Sri Venkateswara at 96.25 per cent.

Ramjas too announced a high cut-off list with several additional eligibility criteria with percentages required to get admission to Economics, English and Commerce ranging between 91.50 per cent and 98.75 per cent.

While the cut off for English ranged till 98.5 per cent with the highest being at Hindu college, the first ever cut-off marks for the Journalism course were above the 90 per cent mark in all the six colleges offering the course.

In Science courses, Computer Science saw high cut offs considering their popularity among the applicants. Hindu College came out with a high cut off of 96.5-97 for Maths and 97.33 for Physics.

Cut-offs for Arts courses such as Political Science, History, B.A. Programme were also very high. B.Tech courses and Bachelor in Management Studies, which have been scrapped after the FYUP was rolled back, did not feature in the cut-off lists.

Meanwhile, St Stephen's College has announced that to incorporate the changes in admission guidelines, the provisional lists already published will be modified and republished on Wednesday.

The college, which conducts its admissions separately, had not opened applications for BA and BSc programme courses. According to DU guidelines, students who have registered for the current academic year will be eligible for admission to all courses wherever they meet the criteria. Giving another chance to those students who had missed the deadline to fill application forms, the varsity has
allowed them to take admission by filling the university registration form along with the college admission form.

Promoted
Listen to the latest songs, only on JioSaavn.com
Under pressure from UGC to act on its directive, Delhi University on Saturday scrapped FYUP and reverted to the previous three-year structure.