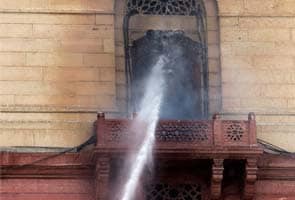 New Delhi: The fire that broke out at the building which houses the Union Home Ministry in June was caused by a burning bidi or cigarette stub thrown on waste paper basket, says the electrical division of Central Public Works Department (CPWD) in a reply to an RTI application.

The fire, described as minor by the fire department, broke out in a staircase on the second floor of the home ministry building in North Block in Delhi June 24.

The place of fire, according to the ministry at that time, was close to the offices of the home minister.

The fire was doused and no major damage was reported.

However, it had occurred within days of a massive fire at the Mantralaya or the Maharashtra state secretariat building in Mumbai and raised concerns over fire safety in key ministries in the national capital.

The reply to a Right to Information application filed by Tajinder Pal Singh Bagga to seek information on the incident says that an area just above the place where the fire started was used by some people for smoking.

"A fire broke out in the staircase June 24 around 2 pm and damaged a wooden door and some electric cables," the CPWD says.

"On inspecting the site, cardboards being used as mats, water bottles, cigarette stubs, etc, were found. It was also found that immediately above the fire affected portion, the place was being used by some persons regularly for sitting and other activities."

"It seems the fire occurred due to persons, who usually used this place, would have thrown burning bidi or cigarette stubs through the window on the waste papers," it adds.

The reply also says that access to the fire affected area was through a terrace which was opened only twice a day, but does not explain how the smokers reached the spot.

Promoted
Listen to the latest songs, only on JioSaavn.com
"To access the place where the fire had taken place one has to enter from the terrace which is always locked and is opened twice a day by CISF (Central Industrial Securities Force) personnel at the time of hoisting and lowering the national flag," the reply adds.

In India, smoking is banned in public places, including government and private offices since October 2008.