Record Rain In Delhi: The rain hit Delhi on a day when schools in the city reopened after 17 months.

Record rain in Delhi today led to flooding and traffic jams during the morning rush hour in many parts of the national capital and neighbouring Gurgaon and Noida.

Delhi received 112.1 mm rainfall in a day, the highest in 12 years and a 19-year record for September, said the India Meteorological Department or IMD, which issued an orange alert.

Cars crawled on major roads in the heart of Delhi as rainwater slowed down traffic and left large parts of the city submerged, cutting off many routes.

In visuals, a bungalow in the upscale Sainik Farms in south Delhi was seen flooded with drain water and its residents frantically tried to move household items out. They complained that the civic body hadn't cleaned the drains for a long time. 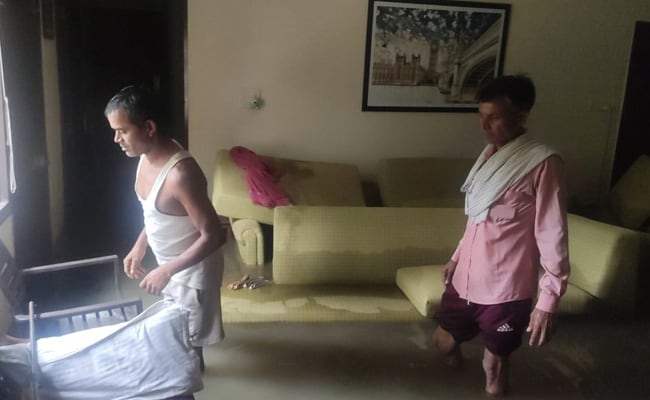 Delhi Rain: Residents were seen struggling even inside their homes.

At Minto Bridge, which is among the first spots to get flooded every time it rains heavily, vehicles were seen in a long queue and many of them were partly in water. The Delhi Traffic Police said both the carriageways had been closed due to waterlogging, and traffic was being diverted.

Traffic Alert
Traffic movement on Minto Bridge (both carriageway) has been closed due to water logging. Traffic diverted from cannaught place towards Barakhamba and traffic coming from Kamla Market side diverted towards Deen Dayal Uppadhay Road.

There were similar scenes in Gurgaon that received 64.2 mm of rainfall in 24 hours. A few images shared by news agency ANI showed cars wading in waterlogged streets and almost frozen at the spot.

'Generally cloudy sky with one or two spells of rain or thundershowers' is likely in Gurugram for the 3 three days, IMD says pic.twitter.com/f1KNUL0fUn

The rain hit Delhi on a day when schools in the city reopened after 17 months. Authorities said that they were implementing strict Covid measures for students as well as teaching and non-teaching staff. Photos showed students carrying umbrellas with masks on while going to school.

The weather department has predicted more rain till Saturday. Authorities have been issuing regular updates, and warning commuters about routes they should avoid due to waterlogging and traffic jams.

Kumkum, a class 10 student says, "There is no doubt that there is a sense of fear but after all, we've to study & sit for exams." pic.twitter.com/WTt2e0JDds

This morning, the city recorded 75.6 mm rainfall in just three hours starting 8:30 am; it has already recorded more than the monthly quota of rain on the first two days of the month, reports said.

"We have been recording short and intense bouts of rains, sometimes around 100 mm rainfall in just 24 hours. In the past, this much precipitation would occur over a period of 10 to 15 days," Mahesh Palawat, Vice President, Skymet Weather, a private forecasting agency, was quoted as saying by news agency PTI.