God will protect me, says Arvind Kejriwal as he refuses security 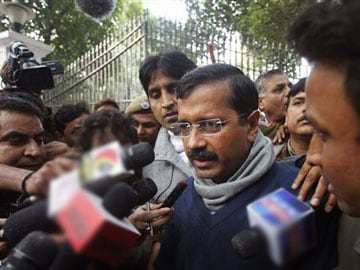 New Delhi: The man who will be Delhi's new chief minister has formally notified the police that he will not accept security cover.  "I don't need any security. I don't need any escort...God is my biggest security," Arvind Kejriwal said in a letter to the Delhi Police today. (Read full letter) He also told NDTV that among his priorities will be "ending the VIP culture" of the capital.

The 44-year-old former tax official will head the minority government formed by his one-year-old Aam Aadmi Party (AAP), which won the second highest number of seats in the state elections earlier this month.

His party has said its ministers will not accept large government bungalows or cars that flash the lal batti or red beacon to grab right of way, often creating large traffic jams.

The Congress, which was crushed after 15 years of governing Delhi, will provide external support for the government.

Although BJP won the most seats in Delhi, it refused to form government without a majority.

Promoted
Listen to the latest songs, only on JioSaavn.com
Mr Kejriwal had been wary of accepting support from either Congress or the BJP, given that many voters cited the two parties' record on corruption as their reason for siding with the Aam Aadmi Party.

But his party said over the weekend that 74 per cent of supporters who took part in an informal poll had endorsed the idea of it forming a government.