Recently, several resident doctors of the three facilities had held a protest at Jantar Mantar followed by a candle light march. 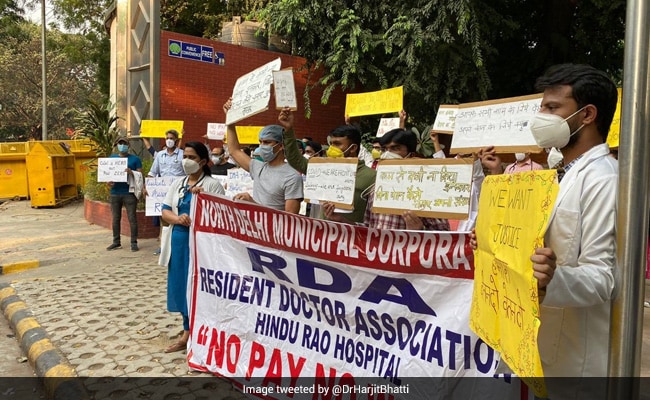 Doctors have appealed to higher authorities to intervene and resolve the crisis.

Recently, several resident doctors of the three facilities had held a protest at Jantar Mantar followed by a candle light march.

"We ate tired of raising this issue, but still no resolution is in sight. We should be in hospitals now. We have no option but to press for our demands. We want our due salaries, it is our basic right," said Abhimanyu Sardana, the president of RDA of Hindu Rao Hospital.

The members of the Resident Doctors'' Association of the Hindu Rao Hospital have been protesting for the past several days and had gone on an indefinite strike, seeking release of salaries due for the past three months.

Resident doctors of the Kasturba Hospital are also agitating over their pending salaries too.

Jyotsana Prakash, a resident doctor at Hindu Rao Hospital, who joined the protest, said, "Some of us might even sit on hunger strike from today. Final decision is yet to be made by the association".

North Delhi Mayor Jai Prakash recently had said that salary has been released for resident doctors for the "month of July".

The BJP, which controls the North Delhi Municipal Corporation (NDMC), and the ruling AAP have sought to blame each other for the situation.

Delhi Records 758 Covid Cases In A Day, Lowest In Over 4 Months