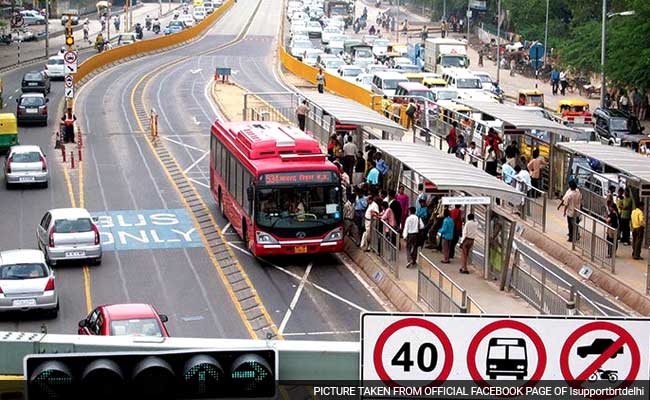 The BRT or Bus Rapid Transport corridor was created by the government of Sheila Dikshit for nearly 150 crores - it was intended to allow buses to shuttle commuters through a lane free of traffic lights. (File photo)

New Delhi: Work on dismantling the controversial BRT corridor in the national capital began on Tuesday.

Officials of the Public Works Department (PWD) started the work in the afternoon, a government official said.

The stretch from Moolchand to Ambedkar Nagar will be completely dismantled by February at a cost of Rs 3 crore.

"The corridor was constructed without any planning. This is a copy-paste concept taken from other countries, which failed badly. The dismantling work will be carried out at night to ensure uninterrupted traffic movement," Mr Sisodia said.

On the lines of Colombia's Bogota model, the 5.8 km-long stretch in south Delhi was opened in 2008 as a solution to Delhi's traffic woes. However, it turned out to be a nightmare for motorists as during peak hours, traffic remained choked in the side lanes.

The Aam Aadmi Party government in July had junked the BRT corridor -- a much-vaunted project of the previous Sheila Dikshit-led Congress government -- following public demand and increasing accidents on the stretch.

The government had, however, said it was not against the BRT, but that it needed to be properly implemented.