Delhi Fog: Travellers had a tough time on Day One of the new year as over 500 flights were delayed and more than 20 cancelled at the Indira Gandhi International airport on Monday. 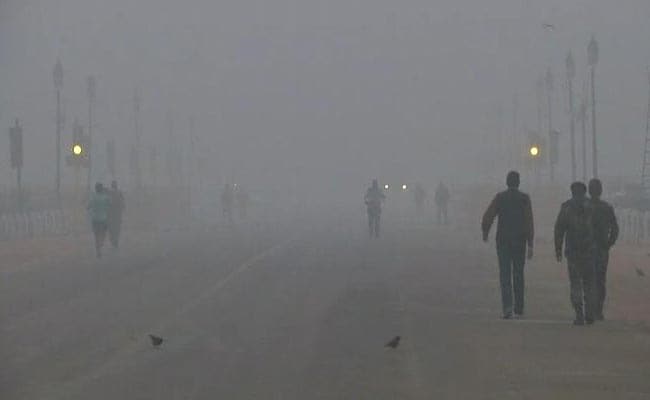 Delhi Fog: With lower PM levels, Delhi's air quality seems to be better than that of Monday.

Flight and train services have been affected in Delhi due to the thick fog in the capital and several other parts of north India. Sixty flights from the Delhi airport have been delayed this morning due to low visibility because of the fog. Six have been cancelled. Nearly 40 domestic and 26 international flights were among those delayed.

The visibility on the runway is reported to be 250 metres and airport officials said takeoffs and landings have been happening.

Sixty four trains headed towards the capital are late and 24 have been rescheduled. Twenty one have been cancelled, the Northern Railways said.

"The sky will remain clear during during the day, with dense fog in the morning," news agency IANS quoted a weather department official.

Travellers had a tough time on Day One of the new year as over 500 flights were delayed and more than 20 cancelled at the Indira Gandhi International airport on Monday. Nearly all flights arriving into and departing from Delhi were affected. About 453 domestic and 97 international flights were delayed. An official said no take-offs could take place between 7:30 am to 9:30 am after visibility on the runways dropped below 50 metres.

Unlike Monday, the air quality in Delhi appears to be slightly better today with the levels of Particulate Matter in the "Moderate" category, according to SAFAR (System of Air Quality and Weather Forecasting And Research).

Promoted
Listen to the latest songs, only on JioSaavn.com
Cold winds swept parts of Uttar Pradesh too on Monday with Najibabad recording the lowest minimum temperature of 5.2 degrees Celsius as dense fog hampered vehicular and rail traffic in the state.

Mandatory Quarantine Order For Covid Patients Above 60 In Delhi Withdrawn