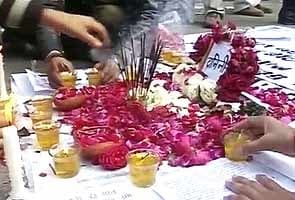 (File Photograph: A picture taken during protests against 'Amanat' case in Delhi)

Delhi witnessed a 23.43 per cent increase in rape cases inthe last one year, revealed figures released by the Delhi Police on Friday.While 572 rapes were reported in the national capital in 2011, the number roseto 706 in 2012.

According to National Crime Records Bureau data, the number of rape casesreported in 2012 is the highest in the last 10 years; they are also more thandouble of what were reported in 2002.

Statistics released by the Delhi Police at its Annual Press Conference also show that the outrage over theDecember 16 gang-rape of medical student 'Amanat' (NOT her real name) appearsto have had no effect on offenders. The city witnessed 45 rapes and 75 cases ofmolestation in the last 15 days of 2012 - the fortnight after 'Amanat' wasraped.

It was during this period that the city saw massive protests over the incident- Delhiites took to the streets demanding justice for the 23-year-old who diedin a hospital in Singapore 13 days after battling for her life. She wasbrutally assaulted with an iron rod by six men who later gang-raped her on amoving bus.

Delhi Police statistics also showed that 96 per cent of rape-accused are knownto victims while only 3.68 per cent of them are complete strangers.

Delhi Police Commissioner Neeraj Kumar said in order to check the risingincidents of crime against women, the Delhi Police has taken many steps."The rate of conviction of rapes in Delhi is much higher than nationalrate. We are not taking solace in this. We need to do much more," he said.

"There has been a steady increase in visibility of women police inselected police stations, PCR vans and motorcycle patrols. To counter problemsof sexual harassment, women police are deployed in civil clothes at appropriateplaces. The police stations at North and South Campus have majority of womenpolice officers," he added.

Promoted
Listen to the latest songs, only on JioSaavn.com
2012: 706

(With Inputs from agencies)