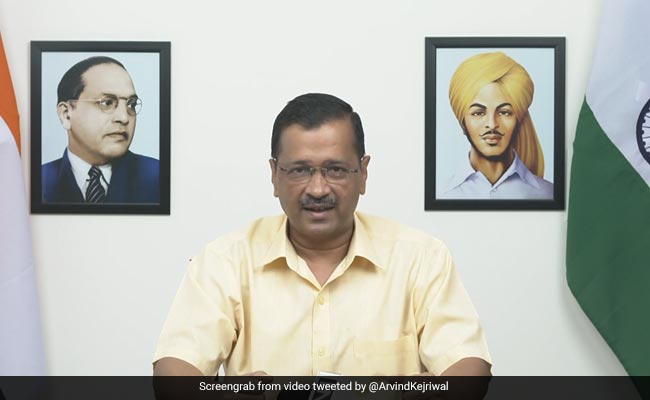 Kejriwal urged 130 crore Indians to take pledge to make the country the greatest in the world.

Around 50,000 children from Delhi government schools will come together seeking to create a world record of making the largest layout of the tricolour on August 4, Chief Minister Arvind Kejriwal announced on Thursday.

In an online briefing, Mr Kejriwal lamented that several nations have witnessed rapid growth and surpassed India in the last 75 years.

The programme will be held at Burari Grounds in Delhi.

"The Lord has blessed India with abundance of rivers, mineral ores, mountains, herbs, crops, oceans and seas. Indians are the smartest and most hardworking in the world, yet why do we lag behind?" he said.

"If we leave the country at the mercy of these leaders and their parties, then we'll stay behind the world for another 75 years," he added.

Mr Kejriwal urged "130 crore Indians" to come together and take a pledge to make the country the greatest and the strongest in the world.

"Seventy five years ago, when the whole country came together, we drove the British out. Today, we all have to come together again to make India the greatest country in the world," he said.

He emphasised that it has to be a collective effort and expressed confidence that the days of India becoming the "best country" in the world are not far.

"Can India lead the world, some people ask me? Why not, is how I respond. I need to ask everyone, what do you think? why can't India rise to become the world's greatest country? "But to accomplish this, we must all work together," he stressed.

He said the participation of entrepreneurs, farmers, industrialists, labourers, members of service class, doctors, engineers, and lawyers is needed to realise the dream.