Republic Day 2019: Security has been heightened in the wake of the arrest of two suspected Jaish-e-Mohammad (JeM) terrorists, who were planning to carry out terror strikes in Delhi during the Republic Day celebrations. 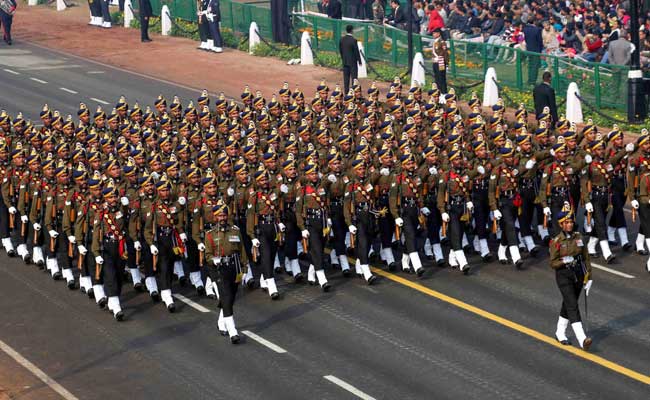 Republic Day 2019: Rehearsals for Republic Day parade are on in Delhi, which has turned into a fortress

The national capital is under an unprecedented level of security with around 25,000 personnel keeping a hawk-eyed vigil to stop any terror strike or untoward incident during the 70th Republic Day celebrations.

Security has been heightened in the wake of the arrest of two suspected Jaish-e-Mohammad (JeM) terrorists, who were planning to carry out terror strikes in Delhi during the Republic Day celebrations.

According to news agency Press Trust of India, the arrested terrorist of the JeM had identified Lajpat Nagar market, the Haj Manzil, the Turkman gate, Paharganj, India Gate and the IGL gas pipeline in east Delhi as potential targets.

Multi-layered security arrangements are in place. Around 25,000 police personnel, including traffic officials, have been deployed. CCTV cameras and face-recognition cameras have also been installed at Rajpath, Madhur Verma, Deputy Commissioner of Police (New Delhi) said.

Mobile hit teams, anti-aircraft guns snipers and sharpshooters have also been deployed to keep a watch on the eight-km-long parade route from Rajpath to the Red Fort, besides the nearby localities.

Snipers have been stationed atop high-rise buildings while hundreds of CCTV cameras are keeping a round-the-clock vigil on people's movements on the parade route.

Elaborate air defence measures, including deployment of anti-aircraft guns, have also been put in place to secure the airspace.

Nearly 25,000 security personnel drawn from the Delhi Police and central security forces have been deployed in Central Delhi. The police are also using counter-drone technology to stop any attack or identify any suspicious flying object, a senior police officer said.

The security personnel have identified vulnerable spots such as crowded markets, railway stations, bus stands and other high-value establishments, and efforts are being made to secure them.

The traffic police have also deployed its personnel to manage route diversions and ensure a safe and secure passage for the visiting dignitaries.

Patrolling in public places has been intensified and checking and frisking at metro stations, railway stations and bus terminals tightened.