High Court Pulls Up Delhi Police Over Alleged Assault On Driver, His Son

The observations by the court came while issuing notice to the Centre, AAP government and Delhi Police seeking their stand on a PIL for an independent CBI probe into the incident. 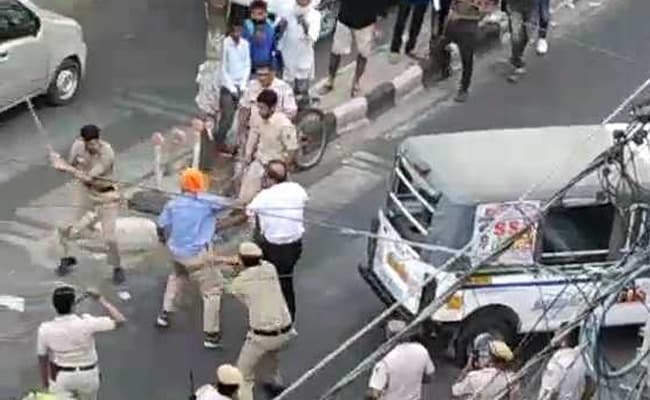 On Sunday, video clips of a brawl between the auto driver, and policemen went viral on social media.

The Delhi High Court Wednesday rapped the Delhi Police for the alleged assault on a three-wheeler driver and his minor son in northwest Delhi's Mukherjee Nagar, saying it was "evidence of police brutality" and how a uniformed force ought not to act.

"How can you justify assault of a 15-year-old boy? If this is not evidence of police brutality then what more do you need?" a bench of Justice Jayant Nath and Justice Najmi Waziri said after perusing the videos of the assault which took place on Sunday.

The court further said if a uniformed force would act in this manner, it would "scare the citizens" who need to feel that police is there to ensure their safety.

The observations by the court came while issuing notice to the Centre, AAP government and Delhi Police seeking their stand on a PIL for an independent CBI probe into the incident.

The bench also called for an independent report within a week regarding the incident from an officer of the rank of Joint Commissioner of Police and listed the matter for further hearing on July 2.

On Sunday evening, several video clips of a brawl between Sarabjeet Singh, the auto driver, and policemen went viral on social media.

Delhi government additional standing counsel Satyakam, appearing for the police, said he was not defending the actions of the officers, adding FIRs have been lodged on complaints of both sides and they have been transferred to the Crime Branch for investigation.

He also told the court that three officers, who were identified from the videos, have been suspended and an officer of Joint Commissioner of Police rank is heading an independent enquiry into the incident.

However, the court, not satisfied with the submission, said eight to nine of the officers involved in the assault were clearly identifiable and asked why no action has been taken against all of them.
The bench, which perused the video in court, also said the clips showed five officers dragging the minor boy along the street and beating him with sticks and asked what action has been taken against them.

"Identify the five officers who assaulted the boy, dragged him along the street all the while pelting him with sticks and that too in open daylight. The boy was unarmed and he was only trying to take his father away from there and yet he was brutally beaten by the officers," the court noted.

It told the police and the Cental and AAP governments that action has to be taken against the five officers also who had beaten up the boy.

In one of the videos which went viral on social media, the three-wheeler driver was seen chasing the policemen with a sword and in the other the officers were seen thrashing the auto driver and his son with batons.

Apart from an independent CBI probe, the petition by Seema Singhal -- a lawyer -- has also sought framing of appropriate guidelines for police reforms to prevent such "violent acts of police brutality and excessive force".

The petition, filed through advocate Sangeeta Bharti, has also sought compensation for the victims of the assault.

It has also urged the court to call for the status and medical reports of the case along with the CCTV footage from Mukherjee Nagar police station.

According to police, the altercation had taken place after the three-wheeler driver's vehicle collided with a police van. Eight personnel were injured in the brawl, the police had claimed.

Subsequent to the incident, the Delhi Police suspended three policemen for "unprofessional behaviour" and had initiated a probe.

All 11 Districts Of Delhi To Remain In Red Zone Till May 17: Health Minister Satyendar Jain