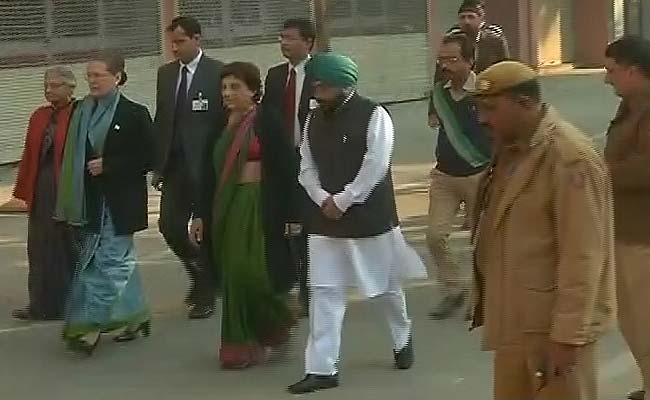 Congress president Sonia Gandhi walked in briskly to vote on Saturday morning and said as she left the Nirman Bhawan polling booth, "What the people wants, will happen."

Her party the Congress, which ruled Delhi for 15 straight years, is widely expected to finish a distant third once again. In December 2013, the party was decimated, managing to win only eight of 70 seats.

But party leaders are stoutly holding on. "You can't write off the Congress," said Congress spokesperson Shobha Oza.

Ajay Maken, who had charge of the party's Delhi candidate and is widely seen as the man who will be chief minister if his party pulls a rabbit out of the hat, said, "There is no last minute nervousness, we are too veteran to be nervous. We have won most of the elections that we have fought."

He too said the Congress could not be written off just yet.

In the New Delhi constituency where Sonia Gandhi votes, Arvind Kejriwal of the Aam Aadmi Party is seen as the favourite to win. He is running for chief minister.

The Congress has fielded against him a Delhi stalwart in Kiran Walia.

In 2013, Mr Kejriwal, in his first election ever, had snatched the seat from the Congress' Sheila Dikshit, defeating her by over 22,000 votes.

As she voted today, Mrs Dikshit, who was Delhi chief minister for a record three terms, said, "On 10th, we will get to know who has the edge...times change, the Congress is very much there."

After the Delhi debacle 13 months ago, the Congress had extended external support to a minority AAP government. But Arvind Kejriwal had resigned after 49 days in office, which led to the imposition of central rule and eventually the fresh elections being held today.

Promoted
Listen to the latest songs, only on JioSaavn.com
Mr Maken said today, "We will never ever give support to AAP again."

With a close contest expected, there has been speculation on the Congress' role in government formation if no party gets a majority again in the 70-seat Delhi assembly.
Comments
Delhi Election 2015Delhi PollsCongress President Sonia GandhiAjay MakenAAP Chief Arvind Kejriwal