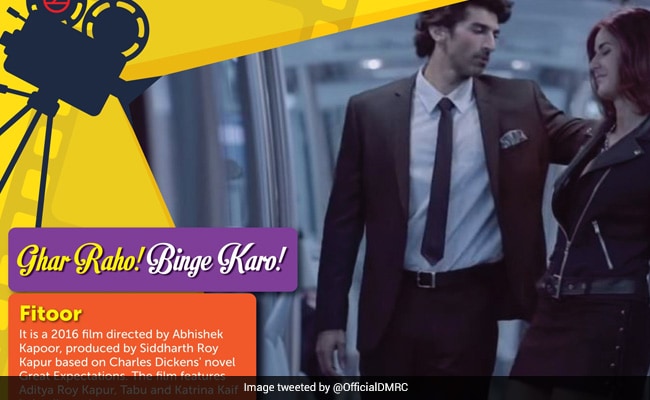 "Fitoor was shot on the Delhi Metro in 2016. Based on the novel Great Expectations, this movie is sure to keep you entertained while in isolation," Delhi Metro tweeted with the hashtag #GharRahoBingeKaro.

As per data from the Union Health Ministry, Delhi has recorded 152 cases of COVID-19 infection so far. Of these 144 are active cases, six were discharged after receiving treatment and two deaths have been linked to the virus.

In India there are 1,965 confirmed cases so far, of which 1,764 are active cases. At least 50 people have been killed by the virus and 151 have been discharged after treatment.

'Fitoor' was shot on the Delhi Metro in around 2016. Based on the novel Great Expectations, this movie is sure to keep you entertained while in isolation. #GharRahoBingeKaropic.twitter.com/VlWbBFgpya

Last week Prime Minister Narendra Modi announced a 21-day "total lockdown" of the country. The lockdown includes suspension (or reduced running) of metros and public buses across the country.

Flight operations, domestic and international, were suspended prior to the lockdown and will remain suspended till April 14, aviation regulator DGCA (Director General of Civil Aviation) said last week.

The Delhi government announced yesterday that it would copy elements of the aggressive containment protocol deployed by South Korea in its fight against the virus. South Korea has reported 9,976 confirmed cases and 169 deaths, with nearly 6,000 having recovered after infection.

Under this protocol, Chief Minister Arvind Kejriwal said, mobile phones would be traced to ensure those bound to home quarantines do not violate the law. He said the decision was temporary and that more than 25,000 phone numbers had been given to the cops to track.

The decision came after repeated warnings to, by both Mr Kejriwal and Prime Minister Narendra Modi, to respect the quarantine and lockdown and stay indoors.

Early in March Delhi had shut public spaces like malls, cinemas and gyms, and also gradually closed down educational institutions to limit the spread of the virus.

The novel coronavirus, so named because it is a previously unknown virus, originated in a meat market in China's Wuhan district in December last year and has caused devastation across the world.

Nearly 10 lakh people have been infected and over 47,000 have died. Iran, Spain, Italy and the United States are among the worst-hit countries.