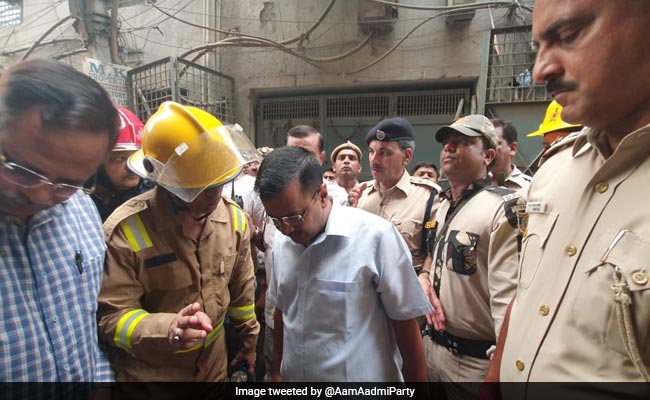 Delhi Chief Minister Arvind Kejriwal announced a compensation of Rs 5,00,000 to the families of deceased.

Delhi Chief Minister Arvind Kejriwal on Saturday visited the factory in Jhilmil area where a major fire broke out that killed three workers as he extended condolences to the family of the deceased.

Mr Kejriwal also appreciated the work of the Delhi Fire Services in the rescue operation.

"I visited the site. Brave Delhi Fire Service warriors saved two lives in Jhilmil factory fire. Despite their best efforts, they cud not save the other three. Heartfelt condolences to their families. Reasons of fire still being investigated," Mr Kejriwal tweeted after visiting the factory.

Mr Kejriwal also announced a compensation of Rs 5,00,000 to the families of the deceased.

"We have decided to provide Rs five lakh as a compensation to the families of the deceased," Mr Kejriwal said.

BJP leader and Rajya Sabha Member of Parliament Vijay Goel also extended condolences to the families of the deceased.

"Pained to hear the news of Jhilmil fire tragedy. My thoughts and prayers are with the bereaved families. I wish a speedy recovery to those injured," Mr Goel tweeted after visiting the factory.

According to the supervisor of the factory, Pradeep, the fire started from the second floor of the building after a short circuit.

But the fire turned massive after pieces of cardboard used to pack the brass taps that came to the factory for finishing touches and packing, caught fire.

"The factory has been running for many years now, we used to finish the brass taps that came to be given finishing touches and were later packed," Pradeep (28) told IANS.

"However, hundreds of cardboards that were stored in the factory for packing purposes allowed the fire to spread," he added.