According to the System of Air Quality and Weather Forecasting and Research (SAFAR), nine of the 10 monitoring stations across Delhi recorded "very poor" air quality, with pollutant PM2.5 ranging between 313-366 units 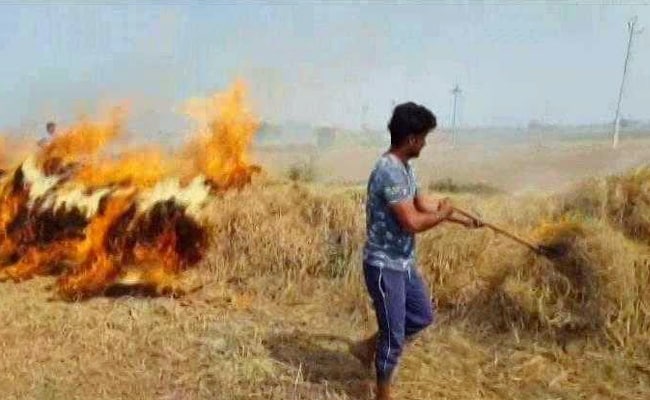 New Delhi: Despite warnings from a green court and environmental authorities, stubble-burning in Punjab and Haryana reached unprecedented levels to further deteriorate the air quality in Delhi and the National Capital Region today. Dry and cold north-westerly winds blowing from Punjab and Haryana at speeds of 10-15 km per hour, according to weather analysts, will continue for the next few days, further worsening air quality in Delhi-NCR.

According to the System of Air Quality and Weather Forecasting and Research (SAFAR), nine of the 10 monitoring stations across Delhi recorded "very poor" air quality, with pollutant PM2.5 ranging between 313-366 units.

Today, air quality at Ghaziabad (NCR) was worse than post-Diwali (recorded on October 20) level, and was described as severe by the Central Pollution Control Board. The AQI in Ghaziabad was 425 today, as compared with 412 on October 20.

Satellite images from the National Aeronautics and Space Administrations' show stubble-burning reached an all-time high with both Punjab and Haryana marked in red (depicting fire).

Stubble-burning was part of the pollution control agenda of the Environment Pollution (Prevention and Control) Authority (EPCA), which a day before Diwali implemented "very poor" and "severe" categories of its Graded Response Action Plan (GRAP) -- which includes more strict measures -- to curb air pollution in Delhi and adjoining areas.

"It (stubble-burning) was an action point, but nothing much was done against stubble- burning as the National Green Tribunal is already involved," EPCA member Usmaan Naseem told IANS.

According to EPCA officials, state authorities (Punjab, Haryana, Rajasthan and Uttar Pradesh) are supposed to keep a check on stubble-burning, as toxic smoke along with weather conditions and wind speeds, impact air quality in Delhi-NCR.

Promoted
Listen to the latest songs, only on JioSaavn.com
The unabated stubble-burning in Punjab and Haryana, estimated to be around 35 million tonnes, was banned by the NGT in November 2015. However, farmers continued to burn paddy straw.

"Air pollution is set to increase. People will complain of heaviness in breathing towards morning and evening hours. The north-westerly winds from Punjab and Haryana are slowing down in Delhi, and this will continue for some days," Mahesh Palawat, director of private weather forecast agency Skymet, told IANS.