NASA's satellite images showed a dense cluster of red dots denoting farm fires in Punjab and parts of Haryana, and a layer of smoke blanketing huge swathes of the Indo-Gangetic plains from east Pakistan to east Uttar Pradesh. 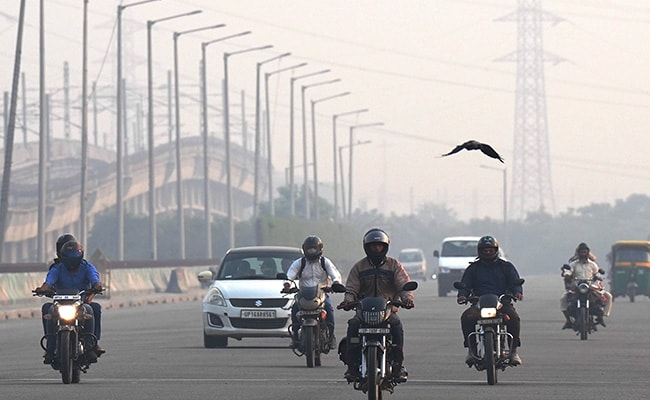 Delhi's air quality index (AQI) stood at 429 at 10 am on Tuesday. (Representational)

The layer of smog lingering over Delhi thickened on Tuesday, lowering visibility and smudging landmarks from view, as the air quality turned 'severe' amid calmer winds and raging farm fires in Punjab.

NASA's satellite images showed a dense cluster of red dots denoting farm fires in Punjab and parts of Haryana, and a layer of smoke blanketing huge swathes of the Indo-Gangetic plains from east Pakistan to east Uttar Pradesh.

Delhi's air quality index (AQI) stood at 429 at 10 am on Tuesday, worsening from 352 at 4 pm on Monday. An AQI above 400 is considered "severe" and can affect healthy people and seriously impact those with existing illnesses.

According to the Energy Policy Institute at the University of Chicago (EPIC)'s Air Quality Life Index (AQLI) released in June, residents of Delhi stand to lose 10 years of life expectancy due to poor air quality.

According to an analysis by the Delhi Pollution Control Committee, people in the capital breathe the worst air between November 1 and November 15 when stubble burning peaks.

The city records an average PM2.5 concentration of 285 micrograms per cubic metre from November 1 to November 15. An official at the India Meteorological Department (IMD) said a thick layer of smog lowered visibility to 600 metres at the Safdarjung airport and 900 metres at the Palam airport in the morning. Low wind speed and low temperatures at night are allowing accumulation of pollutants, said Mahesh Palawat, vice president (meteorology and climate change), Skymet Weather.

However, the transport-level wind direction and speed is favourable for transport of smoke from stubble burning. He said humidity may increase and the wind speed may reduce further from November 4 under the influence of a strong Western Disturbance leading to another episode of smog. SAFAR, a forecasting agency under the Union Ministry of Earth Sciences, said the share of farm fires in Delhi PM2.5 pollution stood at 22 per cent on Monday.

Gufran Beig, the founder director of SAFAR, said the contribution of stubble burning may go up to 30 percent on Tuesday. The Indian Agricultural Research Institute (IARI) reported 2,131 farm fires in Punjab on Monday - the highest so far this season. The agrarian state has recorded a total of 16,004 farm fires since September 15, when stubble burning usually begins. Of this, 10,387 were recorded in the last seven days.

Punjab logged 13,269 farm fires in the corresponding period last year. The Commission for Air Quality Management -- a statutory body formed in 2021 to tackle air pollution in Delhi-NCR -- said last week the increased incidents of stubble burning in Punjab this year "is a matter of serious concern".

Environment Minister Gopal Rai on Monday said Punjab would have seen a large reduction in stubble burning had the Centre supported the state government's "mega plan" to provide cash incentive to farmers for not burning crop residue.

With pollution levels worsening, the Centre's air quality panel had on Saturday directed authorities to impose a ban on construction and demolition activities in Delhi-NCR, except in essential projects, and other curbs under stage three of the Graded Response Action plan GRAP.

GRAP, first implemented in 2017, is set of anti-air pollution measures followed in the capital and its vicinity according to the severity of the situation.

This year, curbs on polluting activities are being imposed up to three days in advance based on forecasts.

Earlier, the authorities would implement the measures only after the PM2.5 and PM10 concentration touched a particular threshold. The next stage in the "Severe Plus" category or Stage IV can include steps like a ban on entry of trucks into Delhi, allowing 50 per cent of staff to work from home in public, municipal and private offices, closure of educational institutions and the driving of vehicles on an odd-even basis.