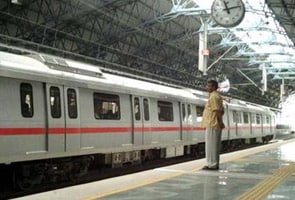 New Delhi: Metro passengers had a difficult time commuting on Monday morning as trains on the busy Noida corridor were delayed due to a technical problem, while trains on the Gurgaon Line were run at a restricted speed following track circuit failure.

Services on the Line 3 (Dwarka Sec-21 to Noida City Centre/Anand Vihar) were affected in the morning after a train developed a technical problem while in service.

The train which was moving towards Dwarka developed a technical problem near Kirti Nagar Metro station at around 8.30 AM, a DMRC spokesperson said, adding the train was immediately taken to a near-by depot.

"The entire exercise took about 20 minutes and normalcy was restored immediately," the spokesperson said. However, passengers alleged that trains on the Line were running late till 11 AM. Stations like Anand Vihar, Laxmi Nagar and Dwarka were crowded with passengers standing on the platform waiting for trains to come.

"I had to wait for more than 20 minutes at the Anand Vihar station today to get a train. It was very crowded. It took more time than usual," Joseph, a software professional, said.

Meanwhile, trains on the busy Gurgaon Line were run at a restricted speed of 20 km per hour between INA and AIIMS Metro stations. Normally, metro trains run at a speed of 40 km per hour.

The spokesperson said the trains are being run at a slow speed due to track circuit failure near the INA Metro Station.

"The problem has been identified and will be rectified in the night after revenue services as taking up repairing work immediately will lead to delay in services," the spokesman said.

A track circuit is a simple electrical device used to detect the presence or absence of a train on rail tracks, used to inform signallers and control relevant signals.

Noida and Gurgaon lines register a total of over 12 lakh ridership per day.
Comments
New DelhimetroDMRCdelay due to technical snag