Prakash Jarwal, who was arrested on February 20, is currently undergoing 14-day judicial custody in the case in which another MLA Amanatullah Khan was also arrested in connection with the alleged assault on the bureaucrat during a meeting at Delhi Chief Minister's Arvind Kejriwal's residence on the night of February 19. 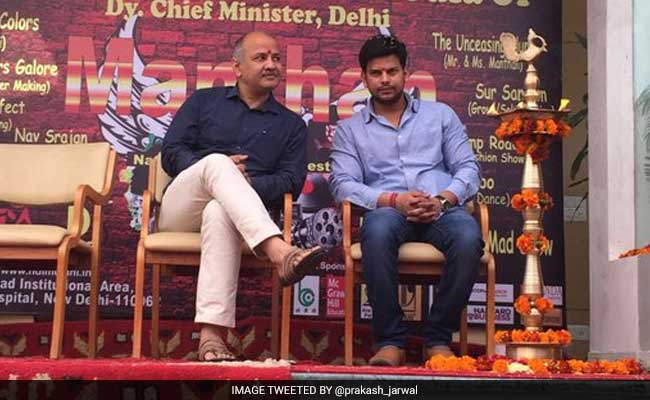 Justice Mukta Gupta issued notice to the Delhi Police and directed them to file a status report in the matter by March 7.

Mr Jarwal had on Wednesday moved the high court after a sessions court here denied him bail, saying he had "openly violated the dignity" of a 56-year-old public servant.

Senior advocate Rebecca M John, appearing for the MLA or legislator, told the court that the investigation in the matter is over and no further custody was required.

"The learned Session judge has failed to appreciate that the FIR was registered at 1 PM next day which constituted substantial delay given the fact that complainant (Prakash)himself is at a powerful position with direct access to the highest officials of the Delhi Police.

"Therefore, the FIR is a clear afterthought and motivated to falsely implicate the petitioner and others," Mr John submitted before the court.

The senior advocate also told the court that the police presented a wrong picture about the previous involvements of the MLA in other cases as those matters were political in nature which have either been quashed or not yet proven to be true.

In his bail plea the Deoli MLA pointed out that the sessions court had made a general remark while denying him bail that he may influence the witness being in power.

"However, she (sessions judge) has failed to consider the fact that the complainant (Prakash) is a powerful bureaucrat and is an extremely influential person himself with access to the highest levels of government and bureaucracy," it said.

The counsel for the AAP MLA sought his release, saying he is a sitting MLA and not a hardened criminal.

Mr Jarwal, who was arrested on February 20, is currently undergoing 14-day judicial custody in the case in which another MLA Amanatullah Khan was also arrested in connection with the alleged assault on the bureaucrat during a meeting at Delhi Chief Minister's Arvind Kejriwal's residence on the night of February 19.

The court, while refusing to grant bail to Jarwal, had said the situation could not be more alarming when lawmakers do not respect the rule of law.

While dismissing the plea of the MLA, the court had noted that the chief secretary's allegations were confirmed by his medical report as well as the statement of Chief Minister Arvind Kejriwal's adviser V K Jain, who had claimed that he saw the CS being assaulted by the MLAs.

Seeking bail before the sessions court, Mr Jarwal's counsel had pleaded that the MLA was a young politician and had got married recently on February 6 so he be granted the relief.

Opposing the bail plea, Additional Public Prosecutor Atul Shrivastava had argued that it was a serious offence as a top state bureaucrat had been assaulted. The police had also alleged that the CCTV footage taken from the house of the CM appears to have been tampered with.

A magisterial court had on February 23 refused to grant bail to Mr Khan and Mr Jarwal, in the assault case saying the matter cannot be treated in "a casual and routine manner" while dubbing them as "history-sheeters".

Promoted
Listen to the latest songs, only on JioSaavn.com
Mr Khan has not yet challenged the magisterial court's order denying him bail.

Both the MLAs were on February 22 sent to 14-day judicial custody by the court. While Mr Jarwal was arrested on February 20, Mr Khan, an MLA from Okhla, was taken into custody the next day.
Comments
Prakash JarwalAAP