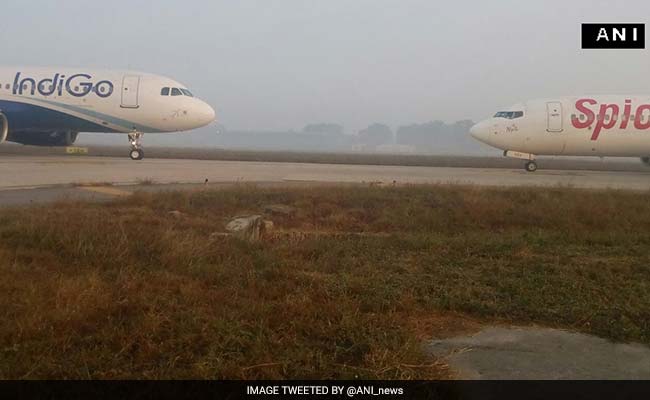 New Delhi: A major accident was averted at the Delhi airport this morning as an IndiGo and a SpiceJet aircraft came face-to-face on the runway, allegedly because of "miscommunication".

The IndiGo flight had just arrived from Lucknow with 160 passengers and the Spicejet flight with 187 on board was about to take off for Hyderabad when the two aircraft came dangerously close.
The IndiGo pilot suddenly saw the other plane and applied the brakes, said officials.

There was miscommunication with the Air Traffic Control (ATC) tower, initial reports suggested. The Directorate General of Civil Aviation, the safety regulator, has started an investigation.

"Following Standard Operating Procedures, (the pilot) took the decision of switching off the engine and reported the incident to ATC," IndiGo said in a statement.

SpiceJet also put out a statement in which it said at no point were its passengers at risk.

"SpiceJet flight SG 123 operating Delhi-Hyderabad was following ATC instructions at all times at the Delhi airport. While taxiing, the SpiceJet crew observed another aircraft on the same taxiway in the opposite direction. Acting promptly, the SpiceJet crew immediately stopped the aircraft and informed the ATC," the airline said in a statement.

Thick fog has affected many flights this season at the Delhi airport. The haze was particularly intense this morning.

This is the second close call to be reported today after a plane veered off the runway at Goa.

Promoted
Listen to the latest songs, only on JioSaavn.com
AJet Airways flight skidded off the runway at the Dabholim airport just before take-off around 5 am. Some passengers were injured while being moved out of the plane on emergency slides.

The regulator is investigating why the plane skidded.