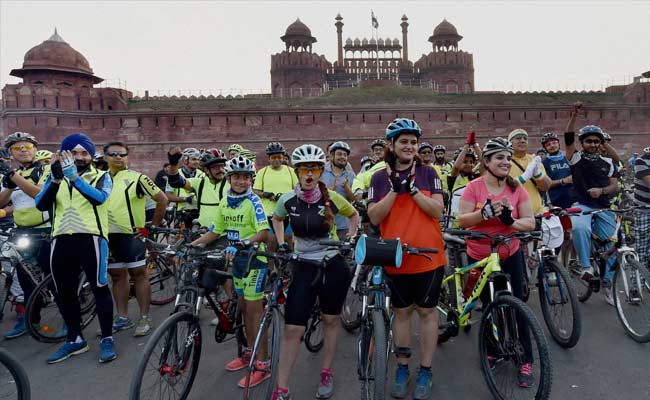 Participants at a cycle rally to observe Car-Free Day in New Delhi on Thursday, October 22, 2015. (Press Trust of India photo)

New Delhi: The first Car-Free Day in the national capital led to a 60 per cent drop in the air pollution on the car-free stretch in comparison to the levels observed on a normal day, a report released by the Centre for Science and Environment (CSE) said today.

"The car-free initiative as well as the low traffic load on the national holiday of Dussehra has helped lower the pollution levels and toxic exposure in the city.

Particulate Matter (PM2.5) is an air pollutant that is a concern for people's health when its levels in air are high.

PM2.5 is tiny particles in the air that reduce visibility and cause the air to appear hazy when levels are elevated.

The Delhi Pollution Control Committee too has supported the CSE report and has observed overall drop of 45 per cent in PM2.5 level in the city.

The Car-Free Day in Delhi was observed on the stretch between Red Fort and India Gate with Delhi Chief Minister Arvind Kejriwal leading a cycle rally in the morning.

"This initiative of the Delhi government has only helped to prove how the growing car numbers in the city aggravate toxic pollution. If these numbers are controlled, pollution can be lowered significantly," said Anumita Roychowdhury, executive director (research and advocacy), CSE.

The exposure monitoring on the road was carried out by CSE first on October 21 -- a regular day -- and during the car-free event today.

In the series of tweets, he said: "Almost 60 per cent reduction in pollution noted on that road. It means traffic is main culprit. We have to reduce traffic."

"Comfortable, reliable, accessible public transport system and better designed roads is the key. I'll personally work on this," he added.