The massive victory of BJP in MCD polls, has rekindled the party's hope of recapturing power in Delhi by repeating the feat in next Assembly elections due in 2020. 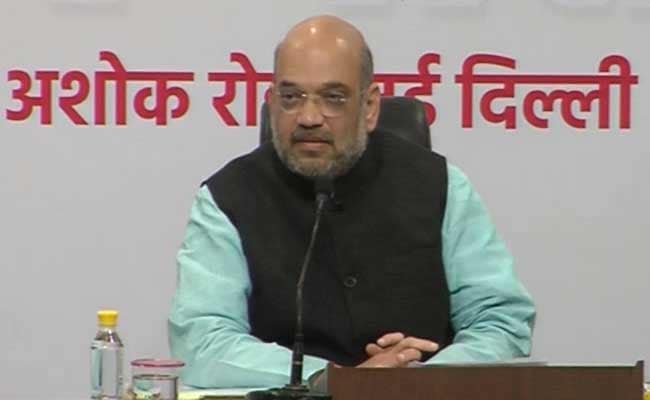 BJP's victory in MCD polls has rekindled the party's hope of recapturing power in Delhi.

The BJP president will be present at Ravidas Ashram, under New Delhi Parliamentary constituency, to listen to PM Modi's monthly radio address to the nation on Sunday, 11 AM, said party vice-president and Delhi unit in-charge Shyam Jaju.

"We have instructed our party workers to connect people with Mann Ki Baat and get them to listen to it. Our party president will visit Ravidas Ashram under the same programme," Mr Jaju told PTI.

Delhi BJP leaders said that the party chief will also interact with locals and learn their hardships and problems.

"The party has promised to provide housing facilities to all by 2022. The policy of 'Jahan Jhuggi Wahin Makan' given by BJP will be boosted by Shah's visit as he could advise the Centre about it," said a senior Delhi BJP leader.

The party president may also have lunch with the local people during the visit, he added.

The recent victory of BJP in the MCD polls was attributed to Delhi unit president Manoj Tiwari's connect with residents of unauthorised colonies, slums and rural parts of the city.

Mr Tiwari who had spent new year's eve at Inderpuri slum after assuming charge of Delhi BJP unit in November last year, has launched a programme of developing slums into 'model dwellings' on the lines of Adarsh Gram Yojna.

Another party leader and Union minister Vijay Goel too has come out with his 'Adopt A Slum' scheme under which the municipal councillors will adopt and develop slums in their wards.

The massive victory of BJP in MCD polls, has rekindled the party's hope of recapturing power in Delhi by repeating the feat in next Assembly elections due in 2020.

Promoted
Listen to the latest songs, only on JioSaavn.com
A tussle has been reported widely between Mr Tiwari and Mr Goel over the leadership in Delhi, although the two met recently to settle their misunderstandings as per instructions of the party leadership.

Delhi BJP leaders including Mr Tiwari maintained a distance from Goel's 'Slum Yuva Daud' held today at DU marking launch of his 'Adopt A Slum' campaign, despite the national leadership's instructions to support the programme.