The Signature Bridge got approval in 1997 after a school bus fell off the narrow Wazirabad bridge into the Yamuna. Twenty-two children were killed in the accident.

The Signature Bridge has a glass box at a height of 154 metres, offering a bird's eye view of the city.

The opening of Delhi's brand new "Signature Bridge", three days before Diwali, was expected to be a festive event complete with a laser show. But it got off to a chaotic start this evening as BJP's Manoj Tiwari, refused entry, came to blows with the police. On live television, the Delhi BJP chief was seen throwing punches at the policemen - even hitting one of them on the face - till he was overpowered and escorted out.

Mr Tiwari, who turned up at the event without an invitation, argued that the nearly 2,000-crore  asymmetrical cable-stayed bridge was part of his constituency and he had a right to be present at the ceremony.

"In my constituency (North East Delhi.), I re-started construction of the bridge after it was stalled for many years and now Arvind Kejriwal is organising an inauguration ceremony." Mr Tiwari said.

"I was manhandled and pushed. I am very disappointed with Aam Aadmi Party's behaviour. Is this a way to treat a parliamentarian? Even the police have misbehaved with me. The police is with them," he added. 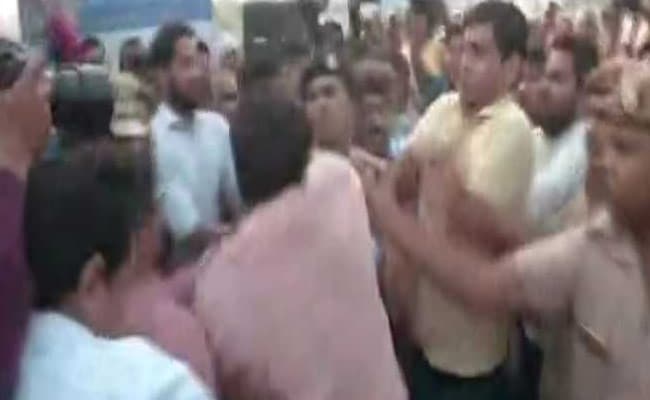 On live television, Delhi BJP chief Manoj Tiwari (seen here in a pink kurta) was seen throwing punches at the policemen - even hitting one of them on the face - till he was overpowered and escorted out

Senior AAP leader Sanjay Singh hit back, arguing that the BJP "did not invite the Chief Minister for the inauguration of metro rail lines to Noida, Bahadurgarh, or Faridabad". "He (Mr Kejriwal) was also not invited for the Skywalk inauguration at the ITO, which was built by Delhi's Public Works Department. Now the BJP has come to stage a drama," Sanjay Singh tweeted.

The new bridge got approval in 1997 after a school bus fell off the narrow Wazirabad bridge into the Yamuna. Twenty-two children were killed in the accident. Work got underway only in 2008 and the cost escalated due to delays.

After numerous delays, the Signature Bridge was opened this evening. It is expected to serve as a major tourist destination, with a viewing deck in the form of a glass box set at a height of 154 meters offering a bird's eye view of the city, said Deputy Chief Minister Manish Sisodia.

The Delhi government had invited all citizens to the opening. "The whole of Delhi is welcome. It's a matter of pride for the city," the Deputy Chief Minister had tweeted.