Disputing Sisodia's claim about non-cooperation by government officials, Union home secretary Ajay Bhalla said that he could have filed details of each of the incidents alleged by Sisodia to prove him wrong. 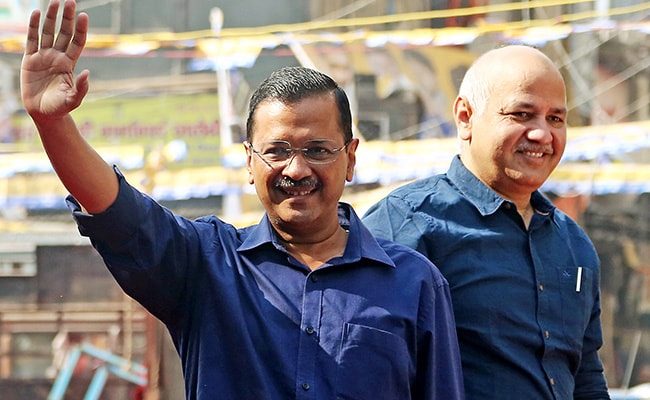 Manish Sisodia had said that bureaucrats in Delhi are not cooperating with the AAP government. (File)

The Centre government in an affidavit told the Supreme Court that allegations of Delhi's Deputy Chief Minister Manish Sisodia of non-cooperation from officials are false in the implementation of policies and projects in the national capital.

Sisodia had filed an affidavit and said that bureaucrats in Delhi are not cooperating with the AAP government, thereby, paralysing the implementation of policies and projects of the elected government in the national capital.

Disputing Sisodia's claim about non-cooperation by government officials, Union home secretary Ajay Bhalla said that he could have filed details of each of the incidents alleged by Sisodia to prove him wrong.

"I am advised not to deal with individual illustrations which would have clearly shown the falsehood contained therein since the deponent of the affidavit is the Deputy Chief Minister and it may not be proper, appropriate or in good taste to deal with such assertions, more particularly, when I have found them to be not true," Bhalla said in the affidavit.

He added. "I have verified from all senior level officials of GNCTD about non-receipt of telecalls etc. and I have found that no such incidents have ever happened. It is submitted that all officials attended all meetings except on some occasions. On enquiry, I have learnt that the dates on which some officers could not attend the meetings were the dates on which they were assigned some other duties by the Delhi government itself."

Sisodia alleged non-cooperation by bureaucrats with the Arvind Kejriwal-led Delhi government before the Supreme Court.

In his affidavit, Sisodia said that the bureaucrats have stopped attending meetings called by AAP ministers and have stopped answering phone calls by ministers and these issues have become more acute with the appointment of the current Lieutenant Governor of Delhi, Vinai Kumar Saxena.

The Central government in its affidavit further said that Delhi is a Union Territory (UT) and no UT under the Constitution has its own services which are not controlled by the central government.

It alleged that Sisodia tried to create an "unwarranted prejudice" to ensure that the AAP government's interpretation of Article 239AA is accepted by the top court.

Article 239AA of the Constitution grants special status to Delhi among the Union Territories through the 69th constitutional amendment.

"I state and submit that the administration of any unit of the administration, be it central government, state government or Union Territory requires very skilful coordination between the political executives and persons working in connection with the affairs of the respective unit. Such coordination takes place by effective administrative skills and not with the threat of control over the officers or employees," the Union home secretary said.

A five-judge Constitution bench will hear on January 10, 2023 plea relating to a dispute over the contentious issue of who should control administrative services in Delhi over the transfers and postings of officers in the national capital.

The bench comprising Chief Justice DY Chandrachud and Justices MR Shah, Krishna Murari, Hima Kohli and PS Narasimha has to decide to raise legal issues concerning the scope of legislative and executive powers of the Centre and Delhi government over control of services in the national capital.

The case was slated to be heard by a Constitution bench after a three-judge bench had in May this year decided to send it to a larger bench on a request by the Central government.

On February 14, 2019, a two-judge Bench of the top court delivered a split verdict on the question of powers of the GNCTD and Union government over services and referred the matter to a three-judge Bench.

While Justice Ashok Bhushan had ruled the Delhi government has no power at all over administrative services. Justice AK Sikri, however, had said the transfer or posting of officers in top echelons of the bureaucracy (joint director and above) can only be done by the Central government and the view of the lieutenant governor would prevail in case of a difference of opinion for matters relating to other bureaucrats.

The two-judge bench which was hearing pleas on six matters pertaining to a long-running conflict between the Centre and the Delhi government had given a unanimous order on the remaining five issues except for the control over services.

Governance of the national capital has witnessed a power struggle between the Centre and the Delhi government since the Aam Aadmi Party (AAP) came to power in 2014.

Prior to February 2019 judgement, a five-judge constitution bench of the Supreme Court had on July 4, 2018, laid down the broad parameters for governance of the national capital. In the landmark verdict, it had unanimously held that Delhi cannot be accorded the status of a state but clipped the powers of the LG saying he has no "independent decision-making power" and has to act on the aid and advice of the elected government.

It had restricted the jurisdiction of the LG to matters pertaining to land, police and public order and on all other matters, it held that the LG would have to act on the aid and advice of the council of ministers.

Video: Students Get Trapped Inside Lift In UP. How They Were Saved