In one of the videos, the Sikh man was purportedly seen chasing some policemen with a sword in his hand, while in another video the two constables were purportedly seen thrashing him with batons. 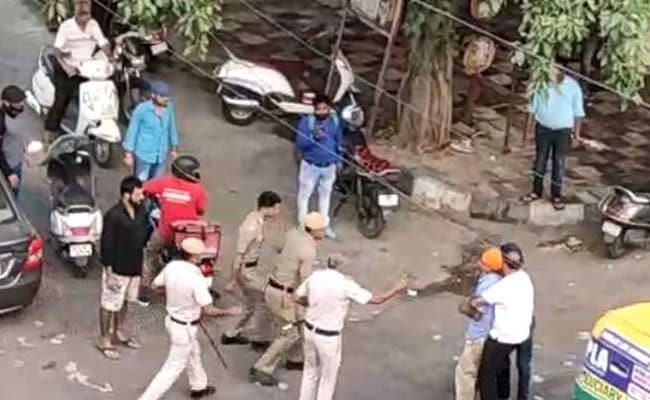 The accident between a ''Gramin Sewa'' tempo and a police vehicle occurred on June 16.

Two Delhi Police constables were dismissed from services on Wednesday for "unprofessional behaviour" after an inquiry report into the incident in which a Sikh tempo driver was thrashed in Mukherjee Nagar area proved them at fault, police said.

The accident between a ''Gramin Sewa'' tempo and a police vehicle occurred on June 16, following which an argument broke out between the Sikh tempo driver and policemen, which soon turned out to be violent.

In one of the videos, the Sikh man was purportedly seen chasing some policemen with a sword in his hand, while in another video the two constables were purportedly seen thrashing him with batons.

Three policemen were suspended on June 16 in connection with the incident. However, an inquiry conducted by a senior police officer found the two suspended constables -- Pushpendra Shekhawat and Satya Prakash -- at fault, following which they were dismissed from services.

According to the inquiry report, Shekhawat, who was posted at the Mukherjee Nagar police station, had kicked Sardar Sarabjeet Singh on the upper part of his body with his shoes even after he was unarmed, and pinned down to the ground.

Further, Prakash, deputed for patrolling duty in the Mukherjee Nagar police station on June 16, had also kicked Singh on his upper part of the body with his shoes while he was being dragged to the police station, the report said.

The above act on the part of Shekhawat and Prakash is "unprovoked, indiscreet and highly unprofessional" and that too in full public view, such act is contrary to the training imparted to them.

The use of feet and shoes to hit an already overpowered person is an "uncivil and abhorrent act", it said.

Such act by a few individuals portrays police in poor light, especially the Delhi Police, from which people have high expectations, police said.

"They have been dismissed to set an example for others to learn and desist from such aggressive and unprofessional behaviour, which portrays bad image of Delhi Police. Not only these constables are likely to indulge in such acts in the future but also their possibility of influencing witnesses to gain undue favours during regular departmental proceedings is strong," police said.