School Land In 'Dispute', Students Forced To Study In A Hut In Odisha

The hut running as school lacks basic amenities like drinking water and toilets. 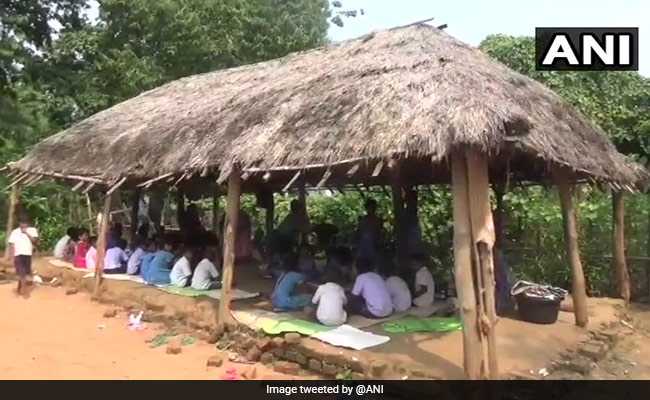 In absence of school, students forced to study in a hut.

Thirty-three students of different classes jostle for space inside a small hut-turned-school in Mayurbhanj district of Odisha.

This is how educational prospects in Mayurbhanj district have remained since 2002.

The project to build the school has been caught in an alleged land dispute.

According to a teacher at the school, Bhabani Shankar Behera, the government couldn't initiate the construction of a school building, as the local authorities failed to allot land to the education department.

He said, "I work as a junior teacher. Due to non-availability of infrastructure, we have to take classes in small huts. Mid-day meal is also cooked at the same place and students also eat it in these same huts. The inconvenience increases whenever there is a storm or rain. The new building cannot be built because space and money are needed to build new rooms."

Meanwhile, a social worker from the district, Sanjib Rout, slammed the government for its 'laidback attitude'.

"The school is many years old and it has remained as such since its formation. It proves a failure of government machinery as well as the local leadership. Education department should have taken an initiative the issue would have resolved long back."

Several complaints have been filed by the villagers and school teachers, but all in vein.

Speaking on the issue, Block Education Officer (BEO) Bhabendra Das said, "If the government hands over the place, then we will build a new school building very soon. The place must be handed over to the Education Department. Without allotment of a land we cannot do much."