President Murmu and Chief Minister Saha also flagged off another extension of the Agartala-Jiribam-Agartala Jan Shatabdi Express up to Khongsang in Manipur. 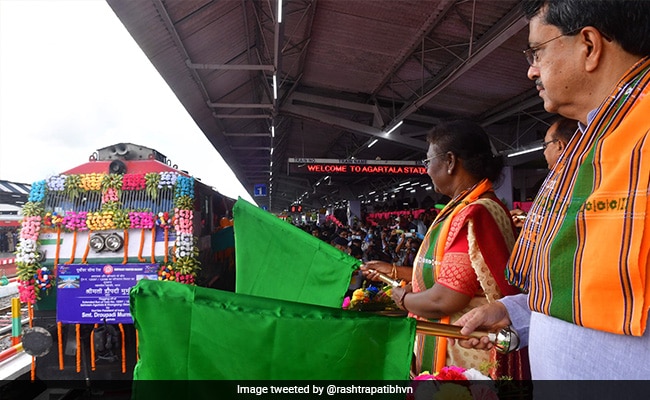 President Murmu is visiting Tripura and Assam from October 12 to October 14.

President Droupadi Murmu and Tripura Chief Minister Manik Saha flagged off the railway extension of the Guwahati-Kolkata-Guwahati train up to Agartala from Agartala Railway Station today.

President Murmu and Chief Minister Saha also flagged off another extension of the Agartala-Jiribam-Agartala Jan Shatabdi Express up to Khongsang in Manipur.

President Murmu is visiting Tripura and Assam from October 12 to October 14.

She is later scheduled to virtually inaugurate and lay the foundation stones for various projects of the Union Ministries of Electronics & Information Technology and Health and Family Welfare and the Government of Assam, which would include the Supercomputer facility Param Kamrupa and the facility for the design and development of high power microwave components at IIT Guwahati; Medical College and Hospital at Dhubri; and Zonal Institutes of National Institute of Virology (NIV) at Dibrugarh (Assam) and Jabalpur (Madhya Pradesh).

In the evening, the President will attend a civic reception and cultural programme, to be hosted in her honour at the Assam Administrative Staff College, Guwahati.

The President will virtually inaugurate, launch and lay the foundation stones for various projects of the Government of Assam and Union Ministries of Road Transport and Highways, Petroleum & Natural Gas and Railways on Friday as well.

These will include the launch of model Anganwadi Centers with modern facilities; and Mission Saubhagya; the inauguration of Rail-Fed petroleum storage depot of Indian Oil Corporation Ltd. at Moinarbond, Silchar; two highway projects; foundation stones for 100 model Secondary Schools in the tea garden areas of Assam and two highway projects and modern Cargo-cum-Coaching Terminal at Agthori in Guwahati.

She will later flag off of a train from Guwahati to Lumding upto Shokhuvi (Nagaland) and Mandipathar (Meghalaya).

Notably, on the first day of her visit to the Northeast, President Murmu interacted with women tea workers of Durgabari Tea Estate in Agartala and said that they represent the state's social diversity.

She emphasised the focus on the education of their children, particularly girls.

President Murmu inaugurated the Tripura Judicial Academy and laid the foundation stone of the National Law University, Tripura, in a special gesture to her, President Murmu was accorded an all-women Guard of Honour by Tripura Police on her arrival in Agartala.

According to a release of the President's Secretariat, during the inauguration of Tripura State Judicial Academy, she highlighted that she sees "immense potential" in the Northeast, by asserting that India has become the fifth largest economy in the world and expressed confidence in the people here as she mentioned that the North Eastern Region will play an important role in making India a five trillion dollar economy by 2025.

Speaking at the event, President added that said that a holistic education system is essential for the development of the nation and the progress of our youth. Along with higher education, we should give more emphasis to primary education. She was happy to note that the Ministry of Development of North Eastern Region, in association with the State Government of Tripura, has launched 'Vidya-Jyoti Mission 100' under which 100 existing higher secondary schools will be converted into quality education institutions with state-of-the-art facilities, it added.

Woman Pulled Out Of Car, Slapped For Honking During Traffic In Gurugram