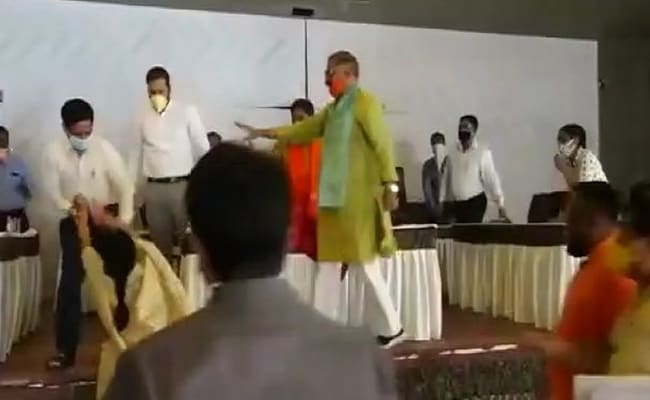 A BJP Councillor Dipika Rani Singh and her husband Pushpendra Singh have been charged for allegedly assaulting a civic body employee in Uttar Pradesh's Mathura.

On Friday, a fight broke out during a meeting of the Mathura Municipal Corporation in which a BJP councillor, Dipika Rani Singh, attacked the Municipal Commissioner and his personal assistant.

Defending herself, councillor Dipikar Singh said that municipal commissioner forcibly shook her had when she was raising issues related to development of her area.

"I tried to apprise the Municipal Commissioner of the problems in my ward. I asked him to call the JE, AE of my ward and to present a list of works done and to be done in my ward. I had just said this much when he (municipal commissioner) shook my hand forcibly and roughly asked me to sit down. This made me lose my temper, I was raising the issues of the public," she said

Municipal Commissioner Ravinder Kumar had said that a case will be filed on behalf of the Municipal Corporation against the councillor.

"Mayor Mukesh Aryabandhu had called the meeting today for passing the budget for development works in the area, all councillors, officials, and our MLAs were present here. Before the meeting could start, the ward 24 councillor, Dipika Rani, started creating a ruckus," Mr Kumar had said.

"When our PA tried to calm her down, she hit him with slippers, following which we boycotted the meeting and left the spot. We are filing an FIR regarding the incident on behalf of the corporation and will also apprise the administration of the incident, and will urge them to cancel the membership of the accused due to this behaviour," he had added.