An inquiry has been ordered into the allegations

After twin gruesome discoveries - of a decomposed corpse and the apparently abandoned body of an infant - in the mortuary of a state-run hospital in Indore, yet another shocker has emerged from the city.

On Monday, the family of an 87-year-old man who died at Indore's Unique Hospital, after being infected with Covid virus received his remains in a white body bag. Hours later, as they were receiving the body, the family was horrified to find parts of the man's face and legs had seemingly been bitten.

The family has claimed rats were allowed to attack the body while it was in storage.

"See how rats have bitten the body in just four hours. This is injustice ... they should have told us, we have taken the body then only," Preeti Jain, the man's daughter-in-law, said.

"We were shocked to see the body as rats had nibbled at eyes, face, ear and legs of the body. Hospital staff denied taking responsibility for the same," Prakash Jain, his son, said.

In visuals of the incident the distraught family can be seen gathered outside the hospital - which is located on a busy main road - with the man's body, still inside a white body bag, on a stretcher. The visuals also show disturbing blood stains on the body bag. 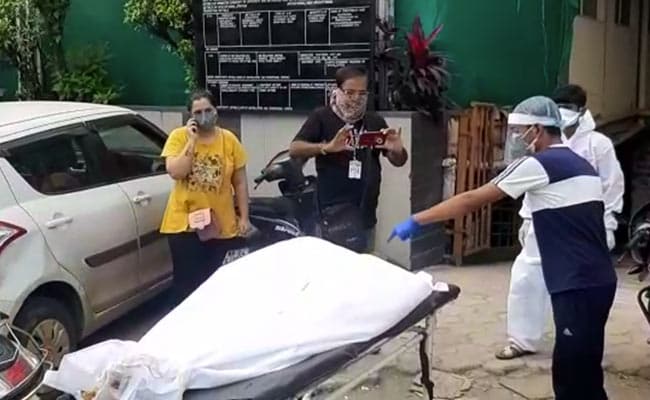 The family has alleged that rats attacked the body

In other visuals, men who appear to be hospital staff (dressed in full body suits) seem to be shouting at the family; in one video one staff member points his finger in anger.

The family can also be seen arguing with local police who are asking them to disperse to ensure crowds do not gather during the pandemic.

The dead man, identified as Navin Chand Jain, was admitted Friday. He was Covid positive.

The administration has launched a magisterial-level probe.

"We have asked the hospital administration. Also, as per the orders of Collector, ADM-level committee has been formed and they have started the enquiry," Amit Malakar, a nodal officer, said.