Indore lockdown: The city security council members flagged down the Porsche car and asked the driver why he was out on the road amid the coronavirus lockdown 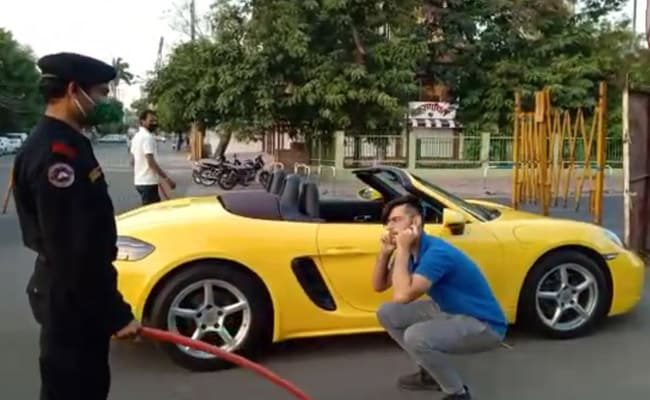 Indore: A council member in a black uniform holding a stick orders the driver to do sit-ups.

A young man who came out in a high-end Porsche convertible car amid the coronavirus lockdown in Indore had to do sit-ups for punishment after he was stopped by volunteers who are helping the police in enforcing the lockdown.

The 20-year-old driver, Sanskar Daryani, had been cruising in the yellow two-seater car on the open roads, which are free of traffic due to the lockdown, when some members of the city's security council spotted him. The city security council has retired personnel from the Army, paramilitary and the police as volunteers who are attached with police stations across Indore.

The council members flagged down the car and asked the driver why he was out on the road amid the lockdown. Mr Daryani is seen without a mask amid the coronavirus pandemic.

In a mobile phone video, Mr Daryani is seen getting out of the car, vehicle papers in his hands, and speaking with the council members.

Then a council member in a black uniform holding a stick orders him to do sit-ups. He is seen holding his ears as he obeys the security person.

The 20-year-old is the son of Indore businessman Deepak Daryani, who owns Asha Confectionery. His family said Sanskar Daryani has a curfew pass and driving license, but the city security council officials allegedly misbehaved with him.

Mr Daryani denied he was out for a joyride. "I was coming back after giving food packets. I showed them my pass but they verbally abused me and asked me to do sit-ups. I tried to talk to them but they didn't listen. I then followed their orders. They filmed it, cracked jokes and then asked me to leave," he said.

His father Deepak Daryani said they have been distributing food packets to the poor and in police stations.

"The police personnel were not involved in the incident. They were from the Nagar Surakhsa (city security council) team. They were hurling abuses at my son. Not once did they listen to what he was trying to say. If there was a problem they should have taken him to the police station, followed due process of law. You are making him do sit-ups and insulting him in front of the media," Deepak Daryani said.

Mr Daryani is said to have filed a complaint with the police against the civilians for enforcing traffic law and punishing his son.