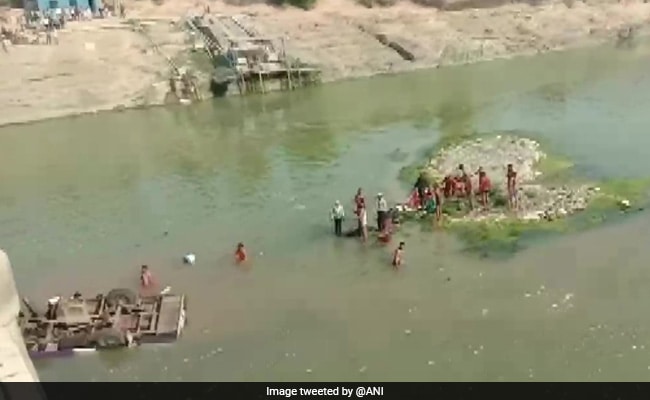 The driver lost control of the bus on a bridge near Papdi village. The bus fell into the Mej river

At least 25 people died and three others sustained injuries as a private bus carrying a wedding party fell into a river on Kota-Dausa highway in Bundi district today morning, police said.

The wedding party with 28 persons on board was headed to Sawai Madhopur from Kota early morning when the driver apparently lost control of the bus while traversing a bridge near Papdi village under Lekhari police station limits, Lakheri Sub-Inspector Rajendra Kumar told news agency Press Trust of India over phone.

The bus, subsequently, fell into Mej river from the bridge that had no wall or railing, Mr Kumar said.

Thirteen people died on the spot while 10 others succumbed to their injuries on way to hospital, he added.

The deaths include 11 men, 10 women and three children.

Most of the injured people were rescued with the help of locals in the village, he added.

I am deeply saddened to learn about the tragic accident in #Bundi in which about 25 people have lost lives after the bus fell into river Mej.. My heartfelt condolences to the bereaved families who have lost their loves ones in this tragedy. I wish speedy recovery to all injured.

Mej river is a tributary of the Chambal river in Rajasthan.