All Schools In Noida, Gurgaon, Ghaziabad, Faridabad To Remain Shut Till Tuesday

A similar order was passed by Ghaziabad District Magistrate Ajay Shankar Pandey, noting that the pollution was impacting the health of children. 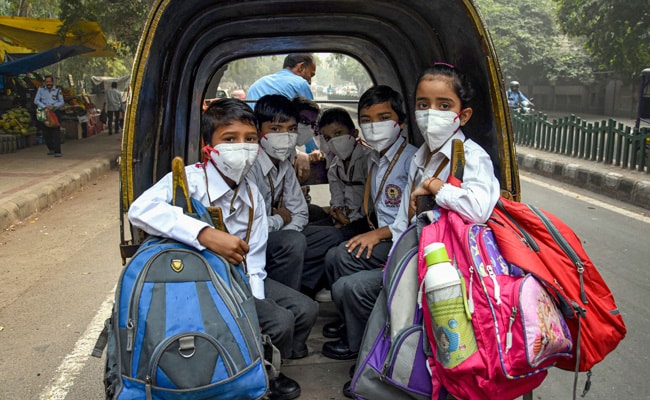 The Delhi government had on Friday announced that all schools will be closed till Tuesday.

All government and private schools in Noida, Ghaziabad, Gurgaon, and Faridabad will remain closed till Tuesday in the wake of a spike in pollution levels, officials said.

Gautam Buddh Nagar and Ghaziabad administrations said the decision has been taken as the levels of particulate matter 2.5 and 10 have been excessive in the air since Diwali, resulting in a major dip in the overall air quality.

"Transport vehicles like buses and minibusses, which a lot of schools use to ferry children, are a major contributor of PM 2.5 and PM 10.

The movement of such vehicles in the city now could aggravate the situation," District Magistrate B N Singh said in a written order.

"Hence, it is ordered that all schools up to Class 12 in Gautam Buddh Nagar will remain closed on November 4 and 5," he added.

A similar order was passed by Ghaziabad District Magistrate Ajay Shankar Pandey, noting that the pollution was impacting the health of children.

The Delhi government had on Friday announced that all schools will be closed till Tuesday.

In Haryana, the School Education Department issued an order to deputy commissioners of Gurgaon and Faridabad asking them to ensure closure of all government, private and aided schools on Monday and Tuesday.

According to Central Pollution Control Board data, the average air quality index from Saturday to Sunday at 4 pm in Noida was 495, 482 in Greater Noida, 491 in Ghaziabad, 486 in Gurgaon and 496 in Faridabad, all in "severe" category, which means it affects healthy people and seriously impacts those with existing diseases.

A Supreme Court-mandated panel had on Friday declared a public health emergency in the Delhi-NCR and banned all construction works, bursting of firecrackers, among others, in the region to tackle the critical situation.