Chennai: Some were cracking their knuckles. Some, simply waving off hovering flies. Most others with arms folded stared blankly. They expressed it differently but they all felt the same: bored, helpless and directionless.

One hundred soldiers of the Army waited for 10 hours before officials from the Tamil Nadu government and local administration could tell them where to go and carry out rescue and relief operations in flood-hit Chennai. And these were troops who had come all the way from Hyderabad fully geared with rescue boats and relief material.

Army sources reveal they were up and ready by 6.30 am yesterday. But it was only around 1.30 pm that the civil administration gave them a generic direction where to head. Along with civil officials two truckloads of men and equipment reached Thiruvanmiyur and were asked to wait.

"We don't know where to go from here. So the government official has now gone to find out," Army personnel told this correspondent who was also present.

After an hour of doing nothing, at 3.30 pm the vehicle returned. The army trucks then headed to Pallikaranai - one of the worst hit areas where roads are still flooded. Desperate and hungry, locals here were clambering over relief vehicles for food and water.

Immediately, the soldiers got off and in seconds they were ready in a formation while a few others began off-loading the relief material. 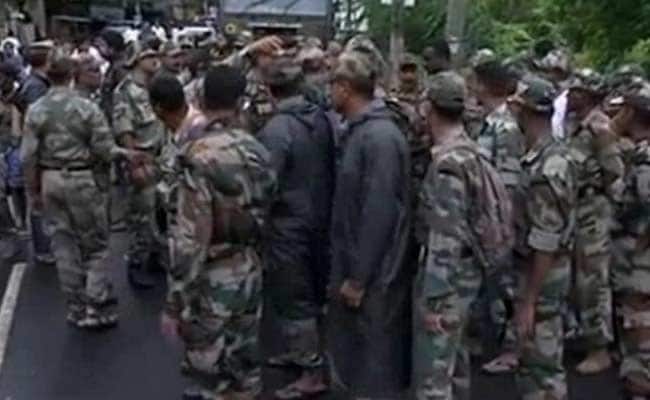 No sooner had they done that, they were told the real rescue location was a little further away. So once again, 100 soldiers remounted the trucks.

Lt Col Rajendra Singh said the protocol was very clear. "It is the civil administration who has to guide and tell us where to go. We have come from Hyderabad and don't know the city or where it's flooded. Our job is to rescue."

The Jayalalithaa regime has been facing intense criticism from the opposition and people for mishandling the crisis.

"No, no, no. We are guiding the Army. No delay. We are moving very fast," Mr Elangovan, the Assistant Commissioner of the Chennai Municipal Corporation present at the location insisted.

Before he could continue Lt Col Singh interrupted him. "Actually we need more coordination with civil agencies. It's required. So that we can react quickly and time is not wasted."

"Delay is the teething problem. We have to bridge the gap. You can see today we have been there and are trying to help. And we don't know where to go. We need to go where they really need us," Lt Khandelwal, the doctor with the unit said dejectedly.