Chennai Liquor Shops To Reopen On Tuesday, Can Serve 500 People A Day

Masks and social distancing are mandatory and liquor outlets in malls and containment zones will continue to remain shut. 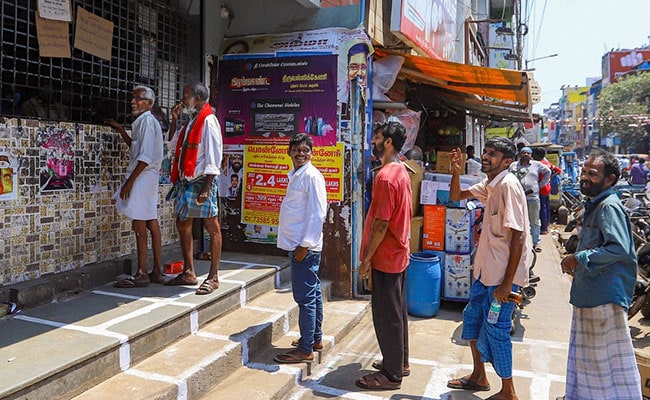 Liquor shops in Chennai will reopen on Tuesday after nearly five months since the lockdown was imposed.

A statement from the state government said the shops will remain open from 10 am to 7 pm and only 500 people will be served at each shop every day through a token system.

Masks and social distancing are mandatory and outlets in malls and containment zones will continue to remain shut.

In May, a day after these shops were opened in the rest of Tamil Nadu outside Chennai, the Madras High Court ordered their closure as large crowds started gathering outside them, violating social distancing norms and guidelines given by the court including issue of receipts and delivery against Aadhaar details. However, the Supreme Court finally agreed later.

The government had lost a daily liquor sale revenue of Rs 90 crore across the state since March. The state had earned more than Rs 30,000 crore revenue last year.

Even after a 50 per cent dip in cases, Chennai sees around 1,000 new coronavirus cases daily with districts neighbouring Chennai showing a spike. Chennai has 11,498 active cases and a total of 1,16,650 positive cases. The state's tally has crossed 3.38 lakh with 54,019 active cases.

Social media is abuzz with comments slamming and welcoming the government decision.

Aarti Boaz, an academician, said, "I feel it's very irresponsible of the state government to open liquor shops when the COVID-19 death count has been rising steadily over the past few weeks. The last time the liquor shops were opened, all the social distancing rules went out of the window. How will it be any different this time?"

However Chacko, a PR professional said, "Finally some good news". Rajesh, an IT professional, added: "Ultimately all have to reopen".

Many women are however worried about rise in alcohol-induced domestic violence which had come down.

Irene, a working professional, says: "The risk of dangerous consequences increases when alcohol abuse and domestic violence are combined. Our home has been quiet all these months and I have been able to sleep peacefully. Does the government really have to make alcohol available? Does it not bother about innocent lives that get tampered by alcoholics?"

PMK, an ally of the ruling AIADMK party, had demanded permanent closure of liquor shops citing the state government's promise to close liquor shops in phases. After the initial closure of a small number of shops, the government made no serious attempts to fulfill its promise although elections are due next year.