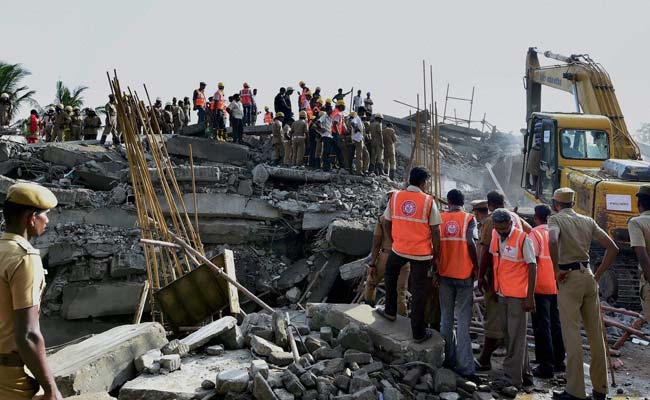 Rescue workers and policemen at the collapsed eleven-storey building near suburban Porur in Chennai on Sunday.

Chennai: Eleven people have died and around 20 are still feared trapped under the debris of an 11-storey under-construction building that collapsed near Chennai on Saturday. Five people including two of the alleged owners and two engineers have been arrested and booked under various sections of the IPC in connection to the incident.

Tamil Nadu chief minister J Jayalalithaa visited the building collapse site today and said that more people than the current estimate were trapped under the debris. "It appears the builders did not adhere to the approved plans and the building appears to have serious structural defects. Rescue operations will continue unabated," she added.

30 people have been rescued so far and the injured are undergoing medical treatment. Rescue operations are on in full swing with multiple agencies, including 10 teams of the National Disaster Response Force (NDRF), engaged in the exercise. Gas cutters, iron rods and shovels are being used to reach those trapped in the rubble. Sniffer dogs, too, have been brought in to locate persons trapped in the rubble.

Officials are speaking to the people who have been rescued to determine how many people were in the building at the time of the collapse to ascertain the number of people trapped.

The incident occurred around 6 pm last evening when the structure collapsed at Moulivakkam, nearly 20 kilometres from Chennai. It was raining heavily at the time.

Most of the people who were trapped under the debris are reportedly construction workers from Andhra Pradesh and southern Tamil Nadu.

The Chennai Metropolitan Development Authority officials said a formal report would be submitted today to the government, which would study if there were any "irregularities" or "illegalities" in granting plan permission for the residential building.

Promoted
Listen to the latest songs, only on JioSaavn.com
The state government has also announced a compensation of Rs two lakh for families of those who died and Rs 50,000 for the injured.