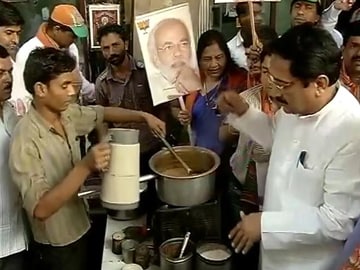 A tea shop in Mumbai with a Narendra Modi poster

Ahemdabad: Narendra Modi, the BJP's prime ministerial candidate, will launch his 'chai pe charcha' or discussion over tea from a tea stall in Ahmedabad today. Though the exact location of Mr Modi's venue is being kept a secret for security reasons, sources said the chief minister was expected to pick a tea stall in the western part of Ahmedabad.

Here's all about the chai campaign in 10 points: