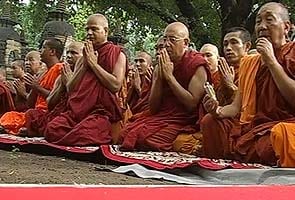 Bodh Gaya: A day after multiple blasts, regular prayers were organised at the Mahabodhi temple in Bodh Gaya. Earlier, the Bihar Police released the CCTV footage of one of the blasts. They have also detained a man named Vinod Mistry, whose identity card was found at the blast site, for questioning. Chief Minister Nitish Kumar said he will ask the Centre to appoint the Central Industrial Security Forces (CISF) to guard the world-famous temple.