Kamala Harris could be the first Indian-American Vice President of the United States. Let that sink in.

It took the largest protest moment in US history to push career politicians to finally pick a colored woman as a running mate, another first in US history.

Kamala Harris is the first person of Indian descent to be nominated by a major political party to be the deputy commander-in-chief of the US forces.

The most popular figure in Biden's vice-presidential selection list - he had more than a dozen women candidates to choose from -- was Elizabeth Warren. Susan Rice, Karen Bass, Val Demings, Stacey Abrams and at least three other colored women were finalists but it finally came down to Rice and Harris.

What clicked in favour of California's junior senator Harris will emerge in the coming days but many believe the Black Lives Matter movement played a role. The social movement became a clarion call for a black Democratic vice-presidential candidate.

But is Harris black?

She once said in an interview: "I'm black, and I'm proud of being black. I was born black. I will die black."

Last year, during the Democratic presidential debate, Donald John Trump, the eldest son of Donald Trump, shared a viral tweet, which he later deleted - Kamala Harris is *not* an American Black. She is half Indian and half Jamaican. I'm so sick of people robbing American Blacks (like myself) of our history. It's disgusting. Now using it for debate time at #DemDebate2? These are my people not her people. Freaking disgusting. 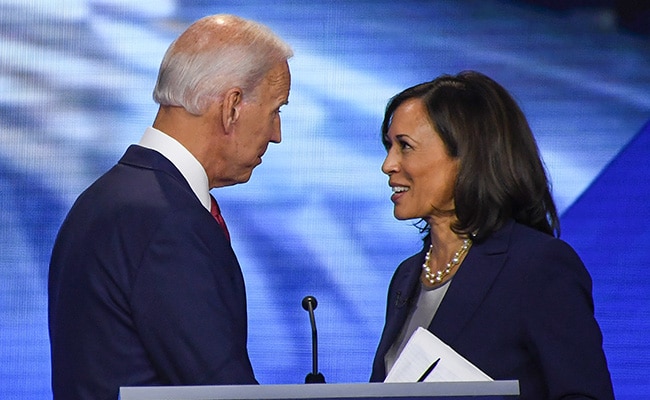 Kamala Harris was born to an Indian mother and a Jamaican father. She is married to a white Jewish man from New York. Would it be a problem if she said, 'I'm black, brown, white, Indian, Jewish, and American?'

What she wants to identify as is Kamala Harris's prerogative. Similarly, what the voter perceives is their choice.

The door for whether Harris is Black or not has been closed on racist bigots with the momentum of the Black Lives Matter movement but will it further alienate a vote bank that is increasingly cashing out to Donald Trump - the Indian-American voters? Traditionally, Indian-Americans vote for Democrats but in the 2016 elections, a sizeable chunk of one of the largest immigrant populations in America voted for Trump.

The bonhomie of Trump and Prime Minister Narendra Modi has been visible on two occasions in the past year - in Houston and in India.

Given this fact, for a candidate to refuse to acknowledge her identity is to potentially alienate a large group of people.

This debate has cropped up in the past too with Tressie McMillan Cottom, a sociology professor at Virginia Commonwealth University, tweeting "People aren't wholesale crazy for debating Kamala's racial solidarity any more than they debate it with any other candidate," she wrote. "What I am not going to let people do is pretend that black voters are stupid or wrong for doing what people surely do to us, which is question our bona fides."

The question here is about what Kamala Harris adds to the electability of Joe Biden as a running mate. Some believe if she refuses to acknowledge her Indian background, it could alienate South Asians and create doubts even about her Black identity. Since Harris hasn't spoken much about the issue, the question of whether she derived anything from her Indian mother growing up comes up. On her part, Harris has already suggested that because she grew up in the black community and went to Howard University, one of the country's few historic black universities, she identifies as black.

The question she may face is why she couldn't identify as being from two or more races and chose only Black. Her sister Maya Harris reveals little of her personal life and the extended family in India has not spoken to the media. Harris, it may be recalled, has traveled to Chennai, her mother's hometown in India, to meet her relatives in the past.

Harris has proclaimed this is the same birther controversy that Obama faced. "This is the same thing they did to Barack," she said. But Obama himself has written in his book, 'The Audacity of Hope,' that while he has experienced some light versions of typical stereotypes, he cannot claim those problems as his own - nor has he lived the life of a black American.

Harris has earlier talked about being inspired by her progressive Indian grandfather.

"My mother was very proud of her Indian heritage and taught us, me and my sister Maya, to share in the pride about our culture. We used to go back to India every couple of years. One of the most influential people in my life, in addition to my mother, was my grandfather P.V. Gopalan, who actually held a post in India that was like the secretary of state position in this country. My grandfather was one of the original Independence fighters in India, and some of my fondest memories from childhood were walking along the beach with him after he retired and lived in Besant Nagar, in what was then called Madras."

So not acknowledging the tiniest role of Indian culture in her life during the 2020 campaign may not be the best plan when it comes to the Indian vote.

If the race between Biden and Trump gets close, could it come down to this?

Amitoj Singh (@amitoj) is a political journalist based in New York City.