By the time we finish breakfast tomorrow morning we should have a pretty good idea of where the off-year US (when there is no Presidential) elections are headed. Why is it such a big deal? And why should anyone outside the US really care?

Traditionally, off-year elections have seen the party of the President, in this case the Democrats, take a beating in the House of Representatives, and to a lesser extent, in the Senate. As it stands now, the Democrats have a very precarious control on the Congress. In the House they have a majority of only five and in the more powerful chamber, the 100 member Senate, it is 50 each and only the Vice President's casting vote that gives them control.

So, for President Joe Biden, the chances of one or both houses going red (Republican) is a strong possibility and a major worry. If the Democrats lose both Houses, he will become a dead duck President, for the last two years of his Presidency, with little or no power to control legislation. If the Democrats manage to hold on to the Senate, then he has some room to manoeuvre, but will still be a lame duck President, since legislation needs the approval of both Houses.

The control of the Senate is key for Biden because that house is more equal than the House of representatives. It is the Senate that solely votes on federal appointments, ranging from judges (including Supreme Court judges) to Secretaries (ministers) downwards to ambassadors. Judicial appointments, given the tremendous power of the US federal courts, has made this a very bloody political battlefield. Since 2012 when the Republicans regained control of the Senate, they have worked at creating a conservative judiciary, which they succeeded with the 6-3 conservative majority in the Supreme Court.

So how close are the Democrats to losing control of the Senate? Very close. In just under two months, the Democrats seem to fallen from a majority situation to crossing fingers and hoping for the best. Fivethirtyeight, the best-known US poll analyst site, now gives the Republicans 54% chance of capturing the Senate. For Democrats, that's down 25 points from 71 to 46 six weeks ago. 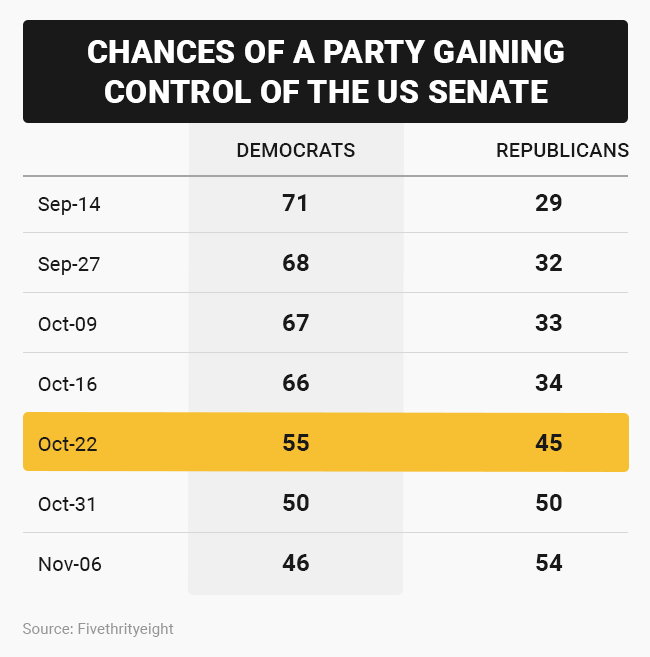 White women, for one, changed. The Wall Street Journal polls showed Democrats leading among white women by 12% in August, now the Republicans are ahead by 15 points. That's a swing of 27% in two months.

The anger over the Supreme Court overturning the pro-abortion Roe ruling in favour of states doing their own thing seems to have dissipated, as the Republicans attacking inflation, crime and immigration has seemingly won back the suburban women's vote.

The other Republican gain continues to be amongst Hispanics, the largest non-white ethnic group. Once solidly Democrat, their support has ebbed since the heady days of Obama when he led Republicans by 40% in this vote bank. Today, The Washington Post reports that Hispanic support for Democrats is below the levels of 2018, as the conservative catholic Hispanic community worries as much about abortion, crime, inflation and even immigration.

Yet, because America is so polarised, there are only a few Senate seats that are actually competitive. The race is tightest in those very states that determined the last two presidential elections - Pennsylvania, Georgia, Arizona and Nevada. 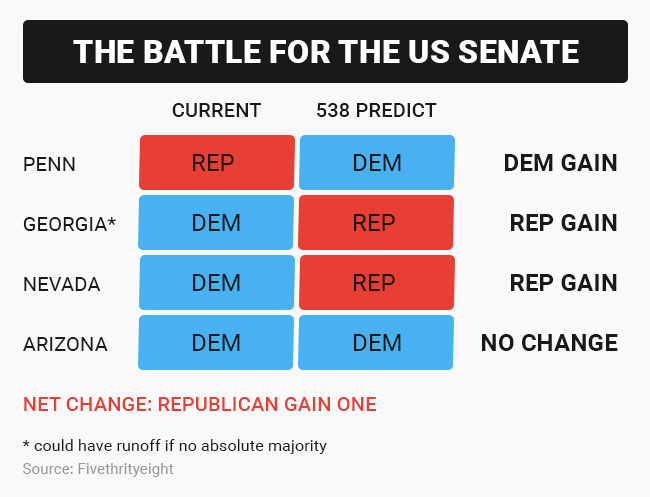 Just this would put the Republicans in control of the Senate.

A Republican majority in the Senate would be a double whammy, given that for the House of Representatives, where all 435 seats are up for election every two years, there is almost unanimity that the Republicans will take control. The question that is being debated is the size of the Republican victory.

A Republican Congress could well bring the Biden's presidency to its knees. With budgetary and committee control they could:

- Institute hearings on the Biden administration

The swing to Republicans could also have a huge impact in states where elections for Governor and Houses are taking place.

Republicans are also close to gaining super majorities in states like Wisconsin and North Carolina, which would allow them to override Democratic Governors' veto.

A big Republican victory will also bring on its coattails many Trump(er) Republicans. Trump has endorsed more than 200 candidates across the Senate, House and state houses; their victories will be seen as critical for Trump to claim control of the party and will influence his decision to declare his presidential candidacy for 2024 as soon as next week.

What do you look for on November 9 morning? If the silent majority that the Democrats hope for come out, then there could be tight Senate races in North Carolina and Ohio. If the Republicans win in New Hampshire, then Biden is in deep trouble.

Blog: What BJP Is Trying To Tell The Muslims Of Gujarat