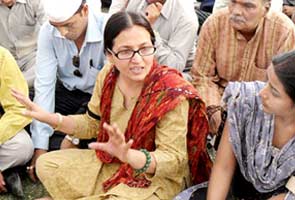 Indore: The CBI has filed a 2500 pages chargesheet in Right to Information activist Shehla Masood's murder case in a special court in Indore.

The prime accused in the case Zahida Pervez, Saba Farooqui, Shaqib Ali (danger) Irfan and Tabish were produced before Special CBI judge Shubra Singh. They have been charged with murder and conspiracy.

CBI had arrested Zahida, Shaquib and Saba after scrutinising call details generated from the tower located in the Koh-e-Fiza area where Shehla was shot dead in front of her house on August 16 last year.

Later CBI arrested Irfan and Tabish in the case from Kanpur.

It was alleged that Zahida ordered the killing of Shehla as she was jealous of her purported closeness with BJP MLA, Dhruv Narayan Singh. Mr Singh's role was also probed in the case, but the CBI has given him a clean chit.

Promoted
Listen to the latest songs, only on JioSaavn.com
According to CBI, Zahida had allegedly hired contract killers through Shaqib to eliminate Shehla and had also maintained a diary of events that took place after her sensational murder.