JD(S) leader HD Deve Gowda said "magistrate inquiry will not bring out the truth, we know what has happened during the previous incidents." 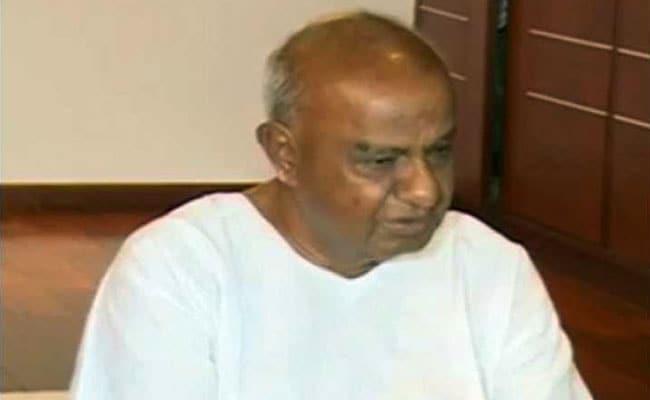 Demanding judicial inquiry by a sitting high court judge into last week's violence in parts of Bengaluru, JD(S) leader HD Deve Gowda said that innocents should not be troubled in connection with the incident.

"An inquiry has to be conducted by a sitting high court judge regarding riots in DJ Halli and KG Halli," Mr Gowda was quoted as saying by his office in a release.

The former Prime Minister however did not wish to comment on possible reasons behind the violence, including speculation that infighting within the Congress might have led to it.

Blaming absolute failure on part of the home department and police for the violence, state Congress too on Saturday had demanded judicial probe by a sitting high court judge into it.

The state government has appointed Bengaluru Urban deputy commissioner GN Shivamurthy to take up magisterial inquiry into the violence.

Mr Gowda said "magistrate inquiry will not bring out the truth, we know what has happened during the previous incidents."

Claiming that more than 300 people have been arrested in connection with the incident, he said, "but I still say, innocents should not be troubled and the government has to think about it."

On COVID-19, Mr Gowda said it is a virus and there was no need for people to fear about it "if adequate precaution is taken."

Infected people should not be discriminated against, he said.

The JD(S) supremo today held videoconferencing with party legislators, district level leaders regarding the COVID situation, organising the party and its ongoing protests against the "anti-people" amendments to certain acts brought in by the state government.

Noting that state government's ordinances amending land reforms act, APMC act and certain labour laws were detrimental to the people, Mr Gowda said, "We are opposed to these ordinances...we will hold protests in all the districts by following COVID rules, and submit a memorandum to Deputy Commissioners there.. at the end a memorandum will also be given to CM."