"Will Recover Costs From Culprits": BS Yediyurappa On Bengaluru Clashes

Violence in Bengaluru: The meeting was held, with social distancing rules followed, at the residence of Chief Minister BS Yediyurappa, who was last week discharged from a private hospital after recovering from COVID-19 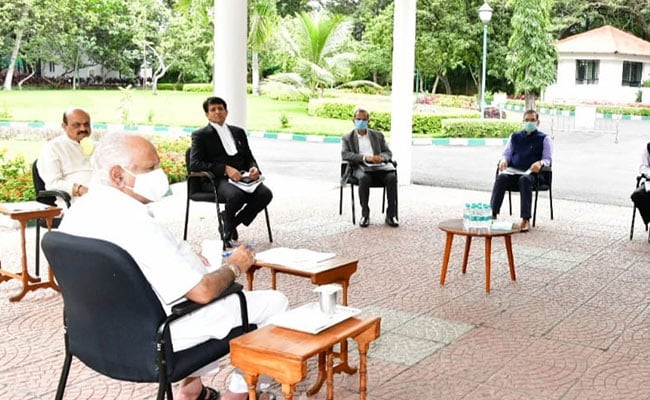 The meeting was held at Chief Minister Yediyurappa's official residence

The Karnataka government held a high-level meeting on Monday on action to be taken after violence in state capital Bengaluru last week, in which three people died in police firing.

The meeting was held, with social distancing rules followed, at the official residence of Chief Minister BS Yediyurappa, who was last week discharged from a private hospital after recovering from COVID-19.

The Chief Minister later tweeted, saying the meeting had discussed ways to recover costs from those believed to be guilty; considerable damage had been done to government and private property during the violence.

"Our government has decided to assess damages caused to public and private property in the violent incidents in KG Halli and DG Halli, and recover costs from the culprits. We will approach the honourable High Court for appointment of a Claim Commissioner, as per honourable Supreme Court order," Mr Yediyurappa wrote in the first of three tweets.

Stringent action has been initiated against the culprits of DJ Halli and KG Halli violent incidents including invoking of the Unlawful Activities Prevention Act - UAPA Act. (2/3)

"Stringent action has been initiated against the culprits... including invoking of the Unlawful Activities Prevention Act (UAPA Act)," he said.

Mr Yediyurappa also said that a SIT (special investigation team) had been formed to conduct a "detailed" probe of the incident and that a special team of three prosecutors would be appointed for a "speedy trial".

"The SIT will consider invoking the Goonda Act if warranted," he added.

A Special Investigation Team has already been formed to conduct a detailed investigation in the matter and a team of three special prosecutors will be appointed for speedy trial of the cases. SIT will consider invoking Goonda Act if warranted. (3/3)

Violence erupted in DJ Halli and KG Halli in the east of Bengaluru on the evening of August 11, with mobs gathering after a Facebook post was deemed offensive to Muslims.

Two police stations and the home of Congress MLA Akhanda Srinivas Murthy, the uncle of the man accused of making the post, were attacked and burned, along with several vehicles.

Home Minister Basavaraj Bommai, who was present at the meeting, told reporters the Chief Minister had been informed of developments in the case and action taken. Mr Bommai also refused to comment on allegations of Congress involvement in the violence.

"I don't want to comment about the Congress. Akhanda Srinivas Murthy has not named anyone in the FIR, but has said he will give, at a later date, (information about) who was there. We have got our own sources, witnesses to conduct the inquiry of burning his house also," he said.

The Home Minister also stressed that there was no question of charging innocent people for the crimes.

On the alleged role of the Social Democratic Party of India (SDPI), many of whose members have been arrested for their alleged involvement, he said: "The SDPI is a political party by itself. Our investigation has nothing to do with political overtones. We are going by the merit of the case and our officials are totally unbiased".