Aero India 2019: Displaying the indomitable spirit of the Indian Air Force, the Suryakiran team mesmerized the crowd with their performance.

The Surya Kiran took only one sortie and then landed.

A fleet of seven Surya Kiran aircraft performed for the first time after the aircraft collision in Bengaluru earlier this week that led to the death of a pilot and injured two from the Surya Kiran Aerobatic team.

Displaying the indomitable spirit of the Indian Air Force and living up to the squadron motto "Sadaiv Sarvottam" (Always the best), the Surya Kiran team mesmerized the crowd with their performance. The Surya Kiran took only one sortie and then landed. The second performance is likely to take place at 4:30 pm today.

Here's the look at Surya Kiran Team's manoeuvres in the skies above Yelahanka Air Force Station:

#AeroIndia2019 : The #SuryaKiran are once again back in the Air at Yelahanka, Bengaluru.
The unbreakable spirit of Airwarriors.
Jai Hind!!!@DefenceMinIndia@AeroIndiashow@SpokespersonMoDpic.twitter.com/dj39ieNS8L 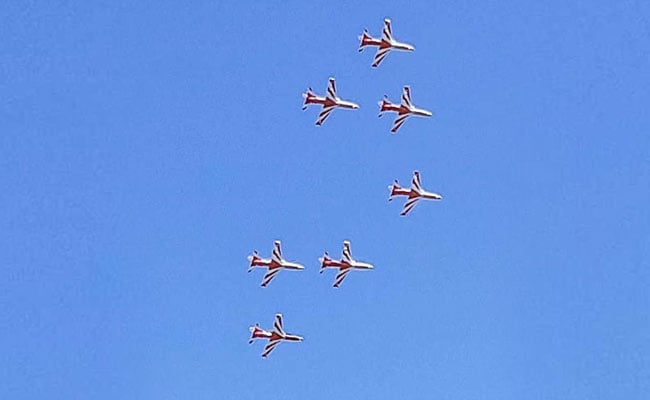 The second performance of Surya Kiran is likely to take place at 4:30 pm today.

In tribute to Wing Commander Sahil Gandhi who died during the rehearsal, the Indian Air Force executed the "missing man" formation on the first day of Aero India. The three-aircraft formation of Tejas, Jaguar and Su-30 flew past with an empty space for the leader.

The Surya Kiran Aerobatics team did not participate in the air show till now. The team said it "lost a buddy" in Sahil and IAF, a professional, and the nation, a hero.

The 12th edition of Air show "Aero India-2019" showcases India's air defence prowess.  The five-day biennial air show will continue till February 24. Today the expo will showcase women's achievements in the aerospace sector and all-women crews will fly a few aircraft as part of the air display.