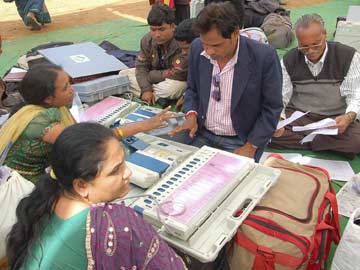 Raipur: Voting today began for 72 constituencies of 19 districts for the second and last phase of the Chhattisgarh Assembly election here amid high security.

A total of 843 candidates are contesting with an electorate of 1,39,75,470 in the last of the two-phase polls to the 90-member Assembly in the state where BJP government led by Chief Minister Raman Singh is eyeing for a hat-trick against the Congress.

"The polling in 72 constituencies of 19 districts has begun from 8 AM and will conclude at 5 PM," an official at the Chief Electoral Office said.

Over one lakh security force personnel have been deployed across the state to ensure peaceful polling, he said.

Apart from that, the son of late PCC chief Nandkumar Patel, Umesh Patel (Kharsiya) and Ajit Jogi's son Amit Jogi (Marwahi) are also in the fray in the second phase.

Meanwhile security forces have been directed to stay alert in some districts of Sarguja division and Raipur division, located on inter-state border, where frequent movement of naxals had been witnessed.

According to police, naxals may create some trouble in Mahasamund, Gariyaband and Dhamtari of Raipur division bordering Odisha and Jashpur, Raigarh and Ambikapur in north Chhattisgarh during polling process.

A total of 18015 polling booths have been set up for the second phase, of which 4594 are sensitive booths, while 1398 are hyper-sensitive stations.

As many as 20957 ballot units and 18015 control unit will be used in this phase. In 11 constituencies- Kota, Lormi, Takhatpur, Beltara, Chandrapur, Kasdol, Raipur city south, Durg city, Bhilai Nagar, Vaishali Nagar, Bemetara more than one ballot unit will be used.

Three ballot units will be placed only in Raipur city south. Besides, 3000 cameras will be used for monitoring during polling process, he said. Around 80,000 officials have been involved for conducting poll on November 19.

Promoted
Listen to the latest songs, only on JioSaavn.com
A record 75.53 per cent voting was registered in the first phase of polling held on Nov 11 for 18 constituencies of naxal affected Bastar division and Rajnandgaon district. Counting will take place on December 8.