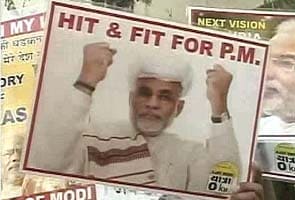 Ahmedabad: A huge stage with a massive cut-out is being erected at the BJP office to welcome man of the moment Narendra Modi, who will not only be the Chief Minister of Gujarat for a third straight term, but also with a bigger mandate. Mr Modi now looks set to win 123 of Gujarat's 182 assembly seats, six more than his 2007 tally of 117 seats. (See Pictures: Narendra Modi, man on top)

He needed only 92 of those seats to form government. But a big winning margin was important for Mr Modi; it will give legitimacy to his claim to a bigger role at the national stage. At the party office in Ahmedabad, his celebrating supporters seem clear where he is headed next. They held up posters that said, "This is the trailer, watch the film in 2014" and "CM in 2012, PM in 2014" and even "Hit & Fit for PM." (Watch: Modi's supporters celebrate win) | (See Pics: Modi wins, supporters say 2014 next)

Many in the BJP have been seeking that bigger role for Mr Modi and there has been much talk of him being projected as the party's candidate for Prime Minister in the 2014 general elections. The leadership in Delhi was less ready to talk about that just yet. Cheering the Gujarat win senior BJP leader Ravi Shankar Prasad would only say, "Modi bhai has always been an important leader in the BJP... We are not a dynastic party which is led by a Yuvaraj. We function in a pure democratic fashion." And party president Mr Gadkari said emphatically, "Gujarat will continue to flourish under the leadership of Narendra Modi." (Read: Will Modi run for PM now? BJP skips the answer) | (Read all political reactions on Mr Modi's win)

Mr Modi is not universally acceptable to allied parties like the Janata Dal (United). As results rolled in to make it clear that Mr Modi would win big again in Gujarat, JD(U) leader Ali Anwar said, "Gujarat is not the full country. Muslims in Gujarat may have voted out of fear. We have made our stand clear, the JD(U) wants a man of credentials." JD(U) sources in Bihar pointed out that the BJP had lost Himachal Pradesh today despite Mr Modi campaiging extensively there; if he had universal appeal, why did his presence not help the BJP in Himachal, they asked. Though the BJP and JD(U) are partners in the National Democratic Alliance or NDA, they fought the Gujarat elections separately. (Read: Nitish's party not swayed by Narendra Modi's win)

Mr Modi reportedly wanted a bigger win to get more bargaining power; also within his own party, where in an internal power struggle, many senior leaders are said to be wary of Mr Modi's attempt to come to the national stage.

The Congress' celebration of managing to contain Mr Modi proved embarrassingly premature. A few hours into counting of votes today, Finance Minister P Chidambaram said, "The Congress is a clear winner in Gujarat, we have been able to contain BJP and Modi to under 117 seats." At that time, 117 seemed a stretch for Mr Modi, but he soon surged ahead. (Read: Congress is a winner in Gujarat, says Finance Minister Chidambaram)

In consonance, the Chief Minister has won his own election in Maninagar constituency of Ahmedabad by a whopping 86,373 votes, defeating political debutante Shweta Bhatt, the wife of Sanjiv Bhatt, the senior policeman who went against Mr Modi in Gujarat riots cases. Mr Modi had in 2007 won by 75,000 votes.

Promoted
Listen to the latest songs, only on JioSaavn.com
There is more ignominy for the Congress - many of its major leaders have lost their elections, including the Congress Legislature Party leader Shaktisinh Gohil and three MPs that it had fielded - Kunvarji Bavalia, Somabhai G Patel and Vitthal Radadia, who recently gained notoreity for brandishing a gun at a toll booth attendant.