Varuna, the seat of Chief Minister Siddaramaiah has gone to his son, Dr Yatheendra Siddaramaiah. It was expected that he would contest against Mr Yeddyurappa's son, BY Vijayendra.

Mysuru: The sons of the two political veterans running for Karnataka Chief Minister will not face off in the constituency of Varuna in Mysuru. Varuna, a rural area with Chief Minister Siddaramaiah as its current legislator, was prepping for weeks for a show down between Mr Siddaramaiah's son, Dr Yathindra Siddaramaiah, a pathologist by training, and BY Vijayendra, the son of the BJP's presumptive Chief Minister, BS Yeddyurappa. Monday's news triggered massive protests by BJP workers in Mysuru, who threatened to resign if Yeddyurappa Junior is not named a candidate by this morning.

"This was a decision taken by us," said Mr Yeddyurappa, who headed the BJP's first southern government when it won the Karnataka election in 2013.

Around him, BJP workers broke down, distressed by what they see as a betrayal of their leader. Shouting slogans against BJP chief Amit Shah and party's senior leader from Karnataka, Ananth Kumar, angry workers damaged furniture at the venue at Nanjanagudu near Mysuru. Later, BY Vijayendra was unable to move out of his hotel because of the thick layers of supporters who had gathered outside and the police had to use batons to control the crowd. The protesting workers said they would resign from the party and vote for HD Deve Gowda's Janata Dal (Secular).

In the evening, the office bearers of the party's local unit held a press conference, where they said they would all resign if BY Vijeyendra was not named a candidate by morning.

Mr Yeddyurappa's elder son BY Raghevendra told NDTV that they were trying to control the damage. "Seems unlikely that there will be change of decision on Vijayendra. Yeddyurappa  announced the decision publicly. It is wrong to blame the high command. The decision was taken by my father," he added.

Mr Siddaramaiah has moved from Varuna to run for office from two constituencies -- neighbouring Chamundeshwari and Badami in the North. His son, Dr Yathindra, is counting on Varuna's loyalty to his family -- apart from his father, his older brother nurtured the constituency till he died suddenly two years ago.

The BJP is yet to announce candidates for Varuna and the Badami seats. Karnataka votes on May 12. 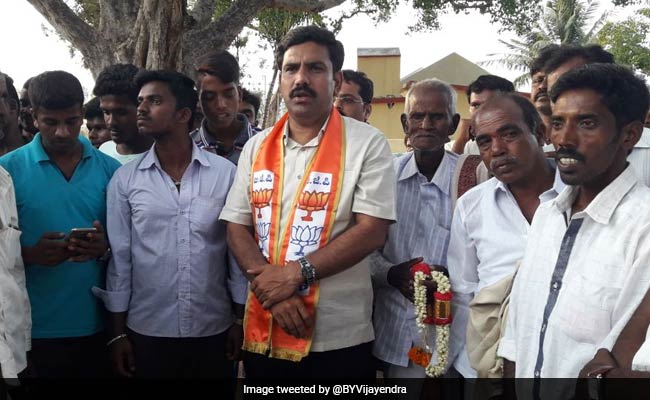 BY Vijayendra tweeted that he supports the BJP's decision, though it's clear that what his father described as a "last-minute decision" has upended earlier calculations.

Both Dr Yathindra and BY Vijayendra are in their 30s. Neither has contested an election before this. Mr Yeddyurappa's son told NDTV last week that he wanted to run against the Chief Minister's son. Indeed, he has spent weeks campaigning in Varuna as the unofficial candidate of the BJP. "I am not upset, this was a decision taken by me," said Mr Yeddyurappa.

However, his son has not been chosen as a candidate from anywhere. When asked if this was the BJP's rejection of a "father-son" combination -- Prime Minister Narendra Modi repeatedly warns against nepotism in his party -- Mr Yeddyurappa said "there are plenty of father-son (combinations) in the BJP."

BY Vijayendra tweeted that he supports the BJP's decision, though it's clear that what his father described as a "last-minute decision" has upended earlier calculations.

Promoted
Listen to the latest songs, only on JioSaavn.com
Either Mr Yeddyurappa was upset with the BJP over its dithering over allotting Varuna to his son, and yanked BY Vijayendra from the contest; or the BJP, worried about losing a high-profile fight, scratched out the contest.

The Congress claimed the development exposes the BJP's nervousness. "That means to say that they are timid. They are not prepared. Making all sorts of heroic statements and now saying my son is not contesting doesn't augur well. It means they are not courageous to face Siddaramaiah," alleged Congress leader Veerappa Moily.