The union road transport minister said Congress is engaged in opportunistic vote bank politics and has compromised the country's security by its minority appeasement. 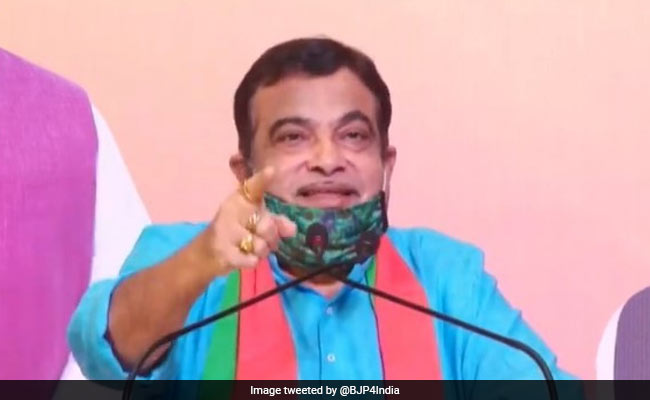 "The CAA is a central law. No one can change it in an Assembly," Nitin Gadkari said (File)

Senior BJP leader Nitin Gadkari Friday lashed out at the Congress for its "guarantee" to the people of Assam of bringing in a legislation in the state assembly to nullify the Citizenship (Amendment) Act if voted to power in the state.

The union road transport minister said Congress is engaged in opportunistic vote bank politics and has compromised the country's security by its minority appeasement.

Without taking any name, he said some people and some party have supported infiltration in Assam and tried to give the infiltrators voting rights, which is not beneficial for the country.

BJP's political agenda on the other hand is development, unity and security of the country and the party is fully committed to it, he said addressing poll rallies at Dharmapur and Golakganj and at a press conference in Guwahati.

"The CAA is a central law. No one can change it in an Assembly. Rahul Gandhi does not know that or what?" he said.

Mr Gadkari's comment follows the one by BJP national president JP Nadda, who while releasing the party's Assam poll manifesto earlier this week had said CAA had been passed by Parliament and would be implemented in the country. It had triggered state-wide protests by political parties and the All Assam Students Union, which had been in the forefront of the 2019 agitation against CAA.

Congress in its "Five guarantees" to Assam promised that would nullify CAA in Assam by bringing in a legislation in the state assembly, besides providing five lakh government jobs to youths in five years, 200 units of free electricity for every household, increasing the daily wages of the tea garden workers to Rs 365 and Rs 2000 per month to homemakers if voted to power.

"The difference between BJP and Congress is that the opposition party does opportunistic vote bank politics and has surrendered the country's security for the sake of its appeasement politics. To appease the minorities, Congress is playing with the nation's security," Mr Gadkari said.

The union minister listed a host of projects that his ministry has implemented in the state and the north east.

He said Assam will be one of the top states in India if BJP returns to power in the state.

"During our tenure, road work of 30,000 crore have been completed in Assam. Sanctions for another Rs 50,000 crore for roads have been given. At present, work for Rs 35,000 crore is on. Assam will have completed roads of Rs two lakh crore in the next five years," he added.

Besides, the Centre has approved Rs 1,300 crore bamboo mission and other industries like an ethanol plant for the state.

He said the north east region will be developed as a manufacturing hub for incense sticks made of bamboo, besides creating waterways to connect the region with South East Asia.

The government is at present developing a Rs 1,200 crore multi-modal logistic park spread across 317 acres at Jogighopa, which will create huge job opportunities.

"What chief minister Sarbananda Sonowal and (Assam minister Chandra Mohan) Patowary did for Assam in the last five years it was just a trailer. The actual film is yet to start," he added.