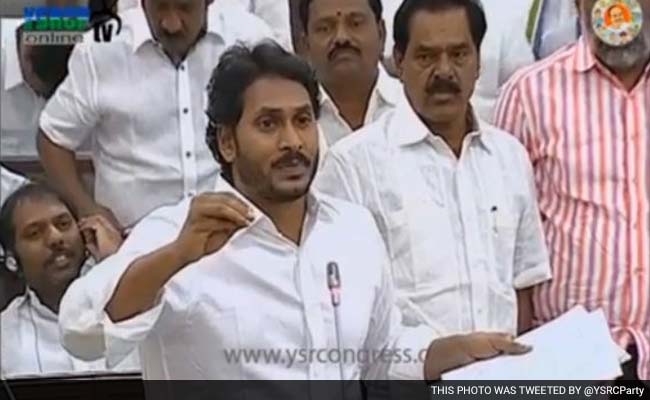 The YSR Congress Party said 400 farmers committed suicide in the last 20 months, and the state government did not implement its promise of complete loan waiver.

"The government has deceived the farmers in the name of complete loan waiver. This has resulted in suicides by hapless farmers in the state," Leader of Opposition Y S Jaganmohan Reddy alleged, as he led his party legislators in the walkout.

In the process, Speaker Kodela Sivaprasada Rao chided Mr Reddy for trying to "hijack" the House.

"In the name of protest, you cannot hijack the House. If you want, you can protest and stage a walkout. Or, sit and follow the House (rules). You cannot continue to lecture," the Speaker told the Opposition leader as the latter continued to make certain remarks.

The loan waiver issue came up for discussion during Question Hour in the Assembly.

A sum of Rs 7,433 crore had already been credited into the farmers' account under the loan waiver scheme. He said gold loans taken for agricultural purposes would be waived in accordance with the guidelines.

The YSRCP legislator regretted that 400 farmers committed suicide in the last 20 months in the state as the government did not implement its promise of complete loan waiver.

Intervening in the discussion, Jaganmohan Reddy said the Rs 7,433 crore that the government claimed to have credited into the farmers' accounts was a pittance, as the overall debt burden was Rs 87,612 crore.

"The interest component on this is Rs 24,000 crore. So the Rs 7,433 crore given in the last two years is not even one-third of the interest, leave alone the principal," Mr Reddy pointed out.

Refuting his claims, the agriculture minister clarified that the total outstanding loans were Rs 89,000 crore as of March 2014, but crop loans amounted to only Rs 48,000 crore. "We are clearing all dues in a phased manner," he said.

Mr Pulla Rao said the TDP government enhanced the ex-gratia to Rs 5 lakh each to the kin of farmers who committed suicide. Of this, Rs 1.5 lakh was being paid to clear the farmer's loan dues, if any, and the balance for the family's welfare.