The TDP leaders in their complaint filed at the Tulluru police station demanded to register a criminal case. 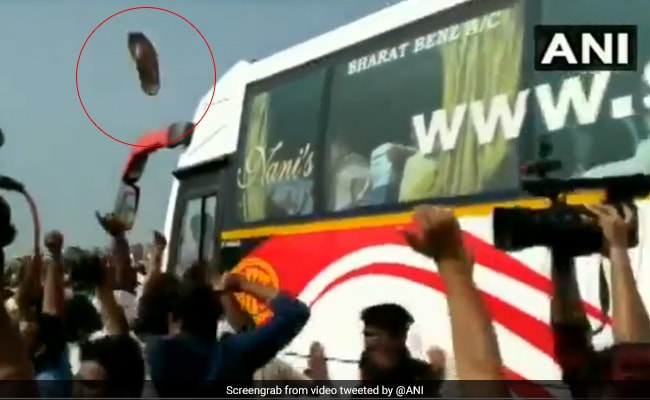 The TDP leaders in their complaint filed at the Tulluru police station demanded to register a criminal case under relevant sections of the Indian Penal Code (IPC) against the YSRCP workers who allegedly obstructed the convoy in which several party leaders including Mr Naidu were travelling.

Several leaders including MLA K Atchannaidu, N Ramanaidu, MLC P Ashok Babu, other MLAs and MLCs of Telugu Desam Party Leaders were travelling in a convoy of vehicles from Mr Naidu's residence at Undavalli to see the development of Amaravati.

"When the convoy of vehicles arrived at the seed access road, a few people holding ply cards and black flags obstructed the convoy raising slogans against TDP and its leaders and pelted stones and chappals on the bus in which N Chandrababu Naidu was travelling," leaders said in the complaint.

The leaders further alleged, "They raised slogans in favour of the YSRCP and a police lathi was thrown at the bus with an intention to attack the convoy of vehicles and to harm Naidu and other TDP leaders."

"The front windshield of the bus in which Naidu was travelling and sitting in the front row was damaged due to stone-pelting. Naidu is a Z+ Category Protectee with NSG Mobile Cover," read the complaint.

On Thursday, Andhra Pradesh's farmers supporting YSRCP government staged a protest and displayed black flags to Mr Naidu while he was on his way to Amaravati to inspect the status of various construction works.

The farmers protested when Mr Naidu's entourage was on its way to the site of the construction works in Amaravati.